Another year of this blog

This blog was begun with its first post on December 8, 2010, so this post completes seven years of the blog. Because I model Southern Pacific, I entitled the blog “Modeling the SP,” and SP topics continue to form the core of the subject matter. But modeling a particular railroad does not mean modeling nothing else, so many of the not-directly-SP  projects that I carry out, all aimed at reproducing some aspect of prototype railroading, also show up on the blog, as I believe they should.
Each year on the anniversary of the blog I have posted a brief summary of results to date, and commented as seems appropriate. Every single anniversary post has exclaimed about the remarkable (to me, anyway) level of interest, as indicated by page views. The Google application I use for this blog, called Blogger, collects and keeps such statistics, and they continue to be interesting.
After the first couple of years, in which page views essentially doubled each year over the previous year’s annual totals, page view numbers naturally flattened out, and annual increases could no longer sustain an annual doubling. But they do continue to show gently increasing numbers of page views each year. After a couple of years, adding about 170,000 page views per year, they jumped last year to above 200,000 annual page views. (I showed the graph Blogger provides, in my anniversary post last year. You can see it at this link: http://modelingthesp.blogspot.com/2016/12/blog-anniversary-post.html .)
This trend is not ending. Early in the morning on July 5 of this year, my blog reached 1,000,000 page views, yet another astonishing (at least to me) milestone. As I write this post, the total page views are over 1,080,000 page views for the seven years. That means that again in the past year, there have been more than 200,000 page views. I certainly never dreamed of such numbers when I started, and even ten percent of that total would have surprised and staggered me. So for loyal readers out there, I do know about your collective support, and I continue to be gratified as well as amazed by it. (Incidentally, I have set Blogger so that it does not count my own page views. Thus the foregoing numbers are all people other than myself.)
Some time back, I added “reference pages” (as the Blogger application calls them) about my weathering process. Links to them can be found at the upper right of the screen, at the top of each blog post. As I hoped, these are receiving numerous page views. I also continue to place documents occasionally on Google Drive, where they are accessible to the entire internet, not just to those who link from this blog. However, some documents seem not to have entered readers’ consciousness, since I often get questions neatly answered by some of those docs. For example, I added a commodity table for tank cars ( http://modelingthesp.blogspot.com/2015/11/a-tank-car-commodity-table.html ), which shows you which commodities go in which car types, and what kind of placard each requires, but questions to me continue to indicate that this document isn’t much recognized. Nothing for it but to keep mentioning the existence of resources like this.
Though I had not intended it when I began the blog, a lot of the content has proven to be about projects of various kinds on my layout. Although I do model SP, many layout projects are not directly about the railroad, but about my efforts to reproduce the “look and feel” of SP railroading in Central California in 1953. That is how I would look at this photo of the Guadalupe local switching at Shumala: 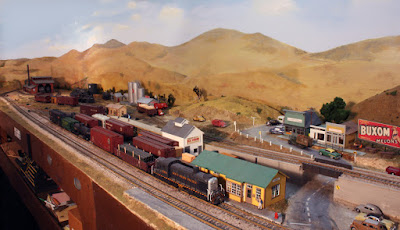 Realistic operation, following SP practice, is very much part of the goals for this layout, and I continue to work toward improving it.
Every year, this anniversary gives me the opportunity to think, once again, about the goals of the blog, and whether they are being accomplished. I continue to believe I am doing what I set out to do. I simply wanted to pass on methods, ideas, techniques, and prototype information, when these were beyond routine. I saw no point in describing, for example, spiking a length of track, or following kit directions exactly. I intended to reach a little beyond that level.
I have also realized that my posts have another relatively simple component. I can explain it this way. When academics analyze how information is transmitted within and among technical groups. they always discover the presence of individuals who are called “gatekeepers.” Gatekeepers may control access to information, but more importantly, they increase its circulation. What gatekeepers do is notice new information or ideas that may interest someone in their contact group, whether it’s of value ro them personally or not, and they pass the word. That is part of what I hope I am doing, in writing this blog. I intend to keep doing it.
Tony Thompson
Posted by Tony Thompson at 12:07 PM