In my first post on this topic, I attempted to summarize briefly what automobile industry traffic is, and how it operated in California, which I model (that post can be found at: http://modelingthesp.blogspot.com/2017/12/understanding-auto-industry-traffic.html ). I followed that post with a second one, entirely concerned with waybills for such traffic, and accordingly it was made part of my “Waybill” post series, though equally Part 2 of the present series (read it at: http://modelingthesp.blogspot.com/2017/12/waybills-part-61-auto-industry-traffic.html ). Today I am wriing about equipment the prototype used for this traffic.
Let me begin with the term “automobile car.”  In the early 1920s, the ARA began to identify box cars with end doors or wide side doors, for loading of bulky cargoes including autos, as “automobile” cars, though it was not required to so letter such cars. Eventually any cars with double doors, or even one-and-a-half doors, were regarded as automobile cars, and were so lettered by most railroads, whether or not they were actually being used to haul automobiles or auto parts. Modelers sometimes think that all cars lettered “automobile” are in auto industry service, or that all cars not lettered “automobile” must not be in auto industry service. Neither statement is true.
In the earliest days of auto transport in box cars, the automobiles were built as a few large assemblies, which could be moved to the loading dock as autos, disassembled for loading into box cars, and then easily reassembled at destination. But as autos grew more complex, this was less practical, and putting two cars on their wheels in a box car wasted a lot of space under the roof.
Shipping complete autos quickly involved wood stands, called “hurdles,” so that the first two autos into the box car could be raised up an angle, and one or two more autos added underneath. In the middle 1920s, the Evans steel auto rack was invented, complete with small chain hoist for raising up the first autos loaded. Shown below is a photo of one of these racks in the “loaded” position, though without an auto in the raised part (Mt. Vernon Car Manufacturing Co. photo). 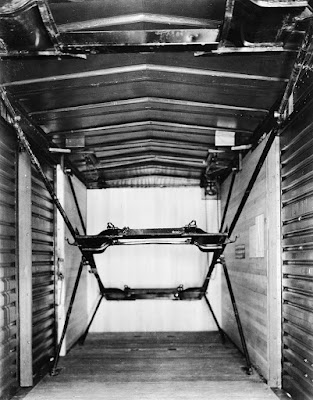 When a car with such racks was loaded, you could see the racks and also the upper and lower autos, as shown in the photo below (from my collection), of a workman shutting the car door. 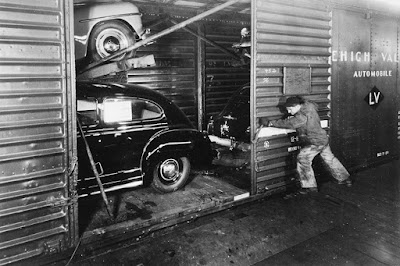 The usual design included floor tubes, in which tie-down chains could be stored when the car did not contain automobiles. A rack like this could be folded up against the car roof and secured in place, making the car available for general merchandise loading. Such cars were classified by the AAR as Class XMR, meaning a car with auto Racks, but also usable for Merchandise. If the racks could not be folded entirely out of the way, the class was XAR, meaning a car mainly suitable for auto shipping. The presence of racks was indicated by a 3-inch white stripe on the right-hand door.

Note under the stripe, the lettering which reads “8-D” (you can click to enlarge). This means the rack is an Evans Type D, and there are 8 floor tubes. The car is an SP Class A-50-12 car, photographed by Chet McCoid at Los Angeles in March 1957 (Bob’s Photo collection, used with permission).
Shipment of auto parts was quite different. In general, cars in parts service did not have the word “automobile” on their sides, unless they were double-door cars (many were not). By the 1950s, when I model, the automobile companies had evolved a system of shipping auto components in special-built racks. These racks not only held the parts securely for shipping, but were readily handled by fork lift trucks. Cars were usually modified inside with special hardware on the walls, into which each rack could be keyed and locked for shipment. Naturally each kind of auto part had a different rack (think, for example of what racks might be like for fenders; engines; or transmissions, each with its own distinctive shape and weight).
Shown at left below is one particular rack, this one for automobile axles (such racks might be different in different model years, as auto designs were modified, and of course for different car models in any one year). Shown at the right is the interior of an SP Class B-50-22 box car with custom attachment hardware for a particular rack type (both, Southern Pacific photos). It can be appreciated that a car modified in such a way could no longer serve in general merchandise service. Its AAR class would change from XM to (usually) XAP, for Auto Parts.

For an example of a quite different rack, the photo below shows a stackable Buick engine rack. These were set side by side in the railcar, and being so heavy, would be stacked only two racks high. Then lighter parts, such as gas tanks, exhaust pipes, or other comparable items could be stacked on top. (Photo from Paragon Construction Co., which built many, many racks for SP.) As mentioned in Part 1 of this thread (link at top of this post), racks were built for and owned by the owner of the railroad car, and often scrapped at the end of a model year. Auto parts were a very lucrative traffic 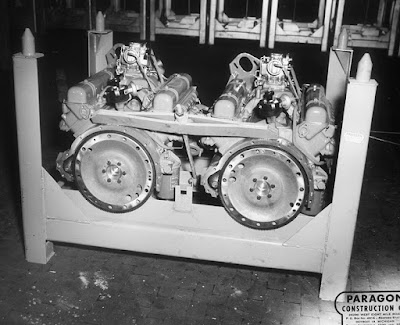 It is probably obvious, but an XAP car, with its specialized rack attachment hardware, would have to return to source empty (but of course carrying its empty racks), and moreover would return to the same plant that was producing its cargo. By contrast, an XMR car could in principle be loaded with merchandise on its return trip. and also could accommodate more than one model of automobile. But as auto parts pools became more formal, and the auto industry tried harder and harder for “just in time” arrivals of auto parts at assembly plants, and also timely shipping of set-up autos, nearly all cars in auto parts and set-up auto service, became “tied” cars that were not used for anything else.
I should mention that this brief overview of auto industry shipping is a topic that is much more extensively discussed in my volumes 3 and 4 of the series, Southern Pacific Freight Cars, as I mentioned in Part 1 of this thread (link at the top of this post). In a following post, I will address model freight cars for this kind of traffic.
Tony Thompson
Posted by Tony Thompson at 11:00 AM