In a previous post, I showed one way to make a stack of produce shipping containers, wooden crates in this instance, with customized labels on the box ends (you can see it at: http://modelingthesp.blogspot.com/2017/10/produce-shipping-boxes-part-4.html ). I also mentioned the individual orange crates made by 3-D printing a design of Ken Harstine’s, available from Shapeways. The crates as you receive them are shown below, still attached to the support rods as they were printed. You can see that the two bottom boards are separated slightly to make an opening, and the same is true on the sides of the crates, as was prototypical. An actual orange crate was shown in my third post on this topic (it can be found at this link:  http://modelingthesp.blogspot.com/2017/08/produce-shipping-boxes-part-3.html ).

The crates still being attached to their support makes it easy to paint them. I began by priming with Tamiya Light Gray primer. Then for the “wood” color, I used two different paints. One was Star Brand paint, color no. STR-12, “Natural Wood,” the other was Tamiya XF-59, “Desert Yellow.” These are quite similar colors, the Tamiya perhaps a little lighter and more yellow, but not distinctively so. 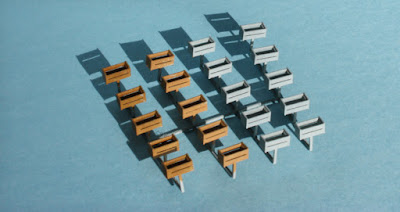 In this view, the row at left is the Star color, the row to its right is the Tamiya color. I think both are fine for this application.
At the same time, I built a couple of “box stacks,” representing a stack of shipping boxes in each case, which I could use with printed labels in groups such as 4 boxes wide by 4 boxes high. They were built the same way as the ones described in the previous post that was cited in the first sentence at the top of the present post, using the same Novelty siding. But the present stacks are only one box deep instead of two. As the conventional citrus box is one foot square on the end, I made my styrene “stacks” to multiples of one scale foot. These too were primed with Light Gray, then painted with either the Star Brand or Tamiya wood colors.

Again in this view, the Star color is at left, the Tamiya color at right. The flat area inside the box is simply a piece of styrene to add more gluing surface for the box labels.
Having prepared the box stack parts shown above, I checked them against my label size in HO scale. Unfortunately, they don’t match exactly. It seems to me that in this situation, you have two choices: rebuild your stacks to match the accurately scaled HO labels, or modify the array of labels to have dimensions matching your styrene box stack. It seemed easier to do the latter, at least as an experiment, so I went ahead.
In the photo below, the left stack was mounted with Silver Moon labels (development of that label was shown in my sixth post, which is at this link: http://modelingthesp.blogspot.com/2017/11/produce-shipping-boxes-part-6.html ). On the right, the stack has the Summer Girl label, a generic style label, not printed as being for any specific fruit or vegetable, and I chose to modify it for my Guadalupe Fruit Company (see the post at: http://modelingthesp.blogspot.com/2017/11/produce-shipping-boxes-part-5.html ). Here are both of them. 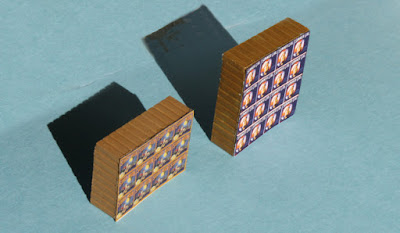 These box stacks are, as I mentioned, pretty unreadable at HO size. I do like to include them on my loading docks at packing houses, but they are more for flavor than anything else. Here is the stack of “Summer Girl” boxes at Guadalupe Fruit in my layout town of Ballard.

I should perhaps mention that Classic Metal Works offers a stack of boxes that are dimensioned to fit their light-duty trucks, their part no. 20212. These oddly have the side and end appearance out of sync with the top surface, that is, the box size would be different on top vs. sides and ends, but maybe the manufacturer hoped that that won’t be noticed. These too can have custom labels pasted to them, but after experimenting I decided not to pursue this approach.
I like the overall look of these stacks of boxes and will be pleased to have them on my loading docks (subject to the “flavor” comment made above), but frankly I doubt most shippers would have put lots of produce out on the dock until empty cars arrived. I will probably use them sparingly on the layout.
Tony Thompson
Posted by Tony Thompson at 3:41 PM