I introduced this topic in a previous post, saying a few words about this event, an operating weekend, and describing two layouts, those of Doug Tagsold and Mike Burgett (you can see that post at the following link: http://modelingthesp.blogspot.com/2017/11/layouts-at-great-lakes-getaway.html ). I visited and operated on more layouts tha those two, however, so this post is to say a little about two others.
The day following my session at Mike Burgett’s C&O (described in the post just cited), I had the distinct privilege to operate on Jack Ozanich’s Atlantic Great Eastern in Battle Creek. Jack’s railroad is freelance, and is set entirely in the state of Maine; it also is set in the season of late winter, when little snow may be seen, but trees are bare and the grass and other ground cover is brownish gray. It is a striking and rarely seen scenic treatment. Jack permits photos, but asks that there be no “aerial”or overall views, only views that could be seen from ground level. Here is such a shot, typical of the main line away from towns. 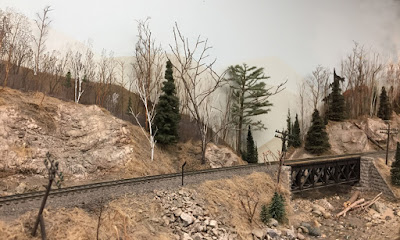 Some will know that this layout was featured in the 2005 issue of Great Model Railroads, from Kalmbach, with numerous excellent photos.
My job at the AGE was South Dover yardmaster, which had both the good and the bad feature that Jack was serving as the engine terminal hostler there. Good because he was happy to clarify the tasks in my job, and tirelessly answered my questions; but bad because I was right under his eye, and he is, to say the least, a stickler for correct prototype operation. I did make some mistakes in what I was doing, and Jack was quick to point that out, letting me know in no uncertain terms that I was wrong. But I really enjoyed the job, and in a way, having Jack right there was an important part of appreciating the layout for what Jack wants it to be, and how he wants it operated.
The second layout in this group was Bill Neale’s Panhandle Division of the Pennsylvania Railroad, set in 1939.  I was especially eager to see and operate on Bill’s layout, because his article about his waybill system, published in Model Railroader in February 2009, was what first got me thinking about prototypical waybills. It wasn’t the waybills themselves, which weren’t especially prototypical, but his use of clear plastic sleeves, as used by baseball card collectors, that got me thinking. My first article, about the preliminary version of my own system, then appeared in Railroad Model Craftsman in December 2009. So I wanted to visit the mother ship, so to speak.
Bill’s layout is a superb accomplishment in a 22 x 25-foot room, well described in Great Model Railroads 2010. The job I drew was assistant yardmaster at Weirton Yard, under the direction of yardmaster Henry Freeman. Henry is justly renowned among model railroad operators as a very accomplished yardmaster, so I was in good hands. Here is an overview of the yard.

My job was to help Henry and also switch adjoining industries. One of those was the nearby Weirton Steel plant, and an early task was to pull the empty coal hoppers and take them to the yard. I quickly realized my switcher couldn’t pull them. Henry’s and my engines together succeeded, and to my amazement there were 24 cars out of sight in the plant. (A brief look at the track plan shows that the plant tracks actually connect to a large staging yard!) Later in the session, we delivered 24 coal loads back into the same track in the plant, as you see here, with the plant at left. 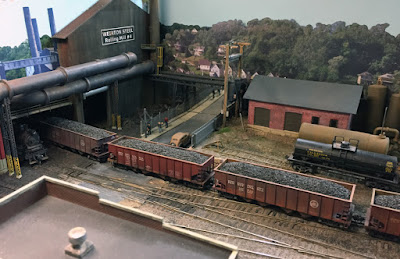 Of course the product of the mill is steel, primarily in rolled form, and shipped both as coils and, for thicker sections, as plate. Here is one end of a long string of plate loads in the yaed. 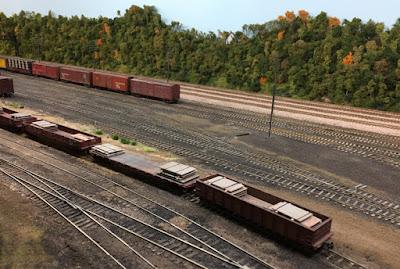 Situated as it is, the layout has locations in Pennsylvania, Ohio, and West Virginia, including the Pennsy’s massive bridge over the Ohio River. Bill has modeled a nicely compressed version of that bridge, though I didn’t get a decent photo of it (the Great Model Railroads article has a good view). Bill is also known for his trackwork, sometimes complex, as in this example at Steubenville, Ohio. 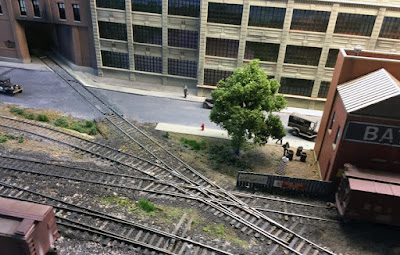 I really enjoyed both the Neale and Ozanich layouts, and feel it was a privilege both to see them and to have a chance to operate on them. This operating weekend was well organized and everyone seemed to have fun, as I certainly did. I look forward to returning to GLG in future years.
Tony Thompson
Posted by Tony Thompson at 10:24 AM