In the January 2018 issue of Model Railroad Hobbyist, due out today but arriving January 1, is the latest (14th) installment of my contributions to the “Getting Real” column series. It’s turned out to be an interesting column because publisher Joe Fugate has rounded up a diverse crew of modelers to write the column in rotation, from Jack Burgess and Mike Rose, to Nick Muff and myself (and previous contributor Marty McGuirk, who is temporarily on hiatus from the column line-up). Like all issues of MRH, you can read it on line or download it, for free, at any time, at their website, www.mrhmag.com , starting January 1.
My topic this time was an updating and extension of previous work published about prototypical waybills, particularly ways to streamline waybill management, thus my sub-title, “Achieving a Balance between Realism and Simplicity.” Many of the topics within this column will be recognized by readers of this blog, though now assembled into one document. Moreover, nearly all photos in the column are brand new, and none of the waybills had been shown before.
I wanted to emphasize two things in this piece: the simplifications achievable with short or “overlay” waybills, and second, a brief discussion of the ideas behind modeling traffic patterns, or if you will, the flow of freight traffic on a layout.
As this column is a kind of “progress report” on my waybill approach, I didn’t repeat earlier descriptions of prototype waybill procedures or contents, or of the method(s) of preparing model waybills. Instead, I included a summary diagram of the waybill arrangement and contents, as shown below. You can click on the image to enlarge it if you wish. 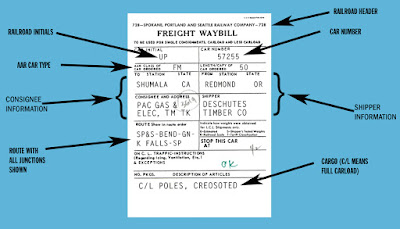 Some things to note about this model waybill: it has a header at top that was taken from from an actual document of the prototype railroad (SP&S), and it includes the AAR code number, 728. (I described these code numbers in a previous blog, which can be found at: http://modelingthesp.blogspot.com/2012/08/railway-accounting-code-numbers.html .)
Further on this example waybill, it was part of the AAR waybill standard to provide full routing from origin to destination, with interchange junctions identified, and this waybill contains such a routing. Examination of routing lists in prototype bills shows that there were no standard abbreviations for junction names, and it would appear that individual clerks often had their own personal set of abbreviations. Note also that there are a few hand-written notations on the bill, as were commonly seen on prototype waybills.
I did spend some time in the column explaining my approach to perishable shipping by season, and the part played by my use of overlay waybills, along with the prototype background. In this blog, this topic was discussed here: http://modelingthesp.blogspot.com/2015/09/seasonality-of-crops-and-traffic.html . Finally, the column contains extensive links and citations of published articles, in an extensive bibliography, so readers can access those earlier materials if interested.
I realize, from comments I hear and emails I receive, that many modelers still have a limited grasp of how model layouts can reproduce prototype traffic flow, so I provided an introduction to that topic in this column. I am continuing to develop that topic and will likely put together a new clinic on the subject, and will likewise be adding blog posts on the subject from time to time.
Tony Thompson
Posted by Tony Thompson at 3:11 PM