In Part 1, I introduced the idea of modeling rooftop equipment enclosures, typically installed to house HVAC (Heating, Ventilation, Air Conditioning) machinery, on the roofs of model buildings (you can read that post at this link: http://modelingthesp.blogspot.com/2017/11/hows-your-hvac.html ). In the present post I want to show some options for additional detailing, and the painted results.
First, adding some details. Most enclosures like this have screened openings, and a few have what appear to be exhaust stacks. For stacks, I had materials at hand to model them, in the form of brass 3/64-inch tubing, K&S no. 815036. (I cut the tubing lengths with a cut-off disk.) To add short lengths of this tubing to the emerging HVAC enclosures, I simply drilled a no. 56 hole, and inserted the 3/64-inch tubing, secured with canopy glue. This tubing is the same as I used for my blue flag receptacles on the layout (see the post about that modeling, at: http://modelingthesp.blogspot.com/2017/04/blue-flags-part-2-modeling.html ).
I also added some rectangles of the same 0.010-inch styrene sheet used to close the ends of the enclosures, to resemble access hatches on the enclosures. These are common on the prototype. The next desired addition was screens. The pieces of diesel locomotive shell have excellent grilles on them, but I wanted to add more.
One easy way to add screens or grilles to an enclosure is etched metal screen. One I have used, and very much like, is one of the many mesh screens from Scale Link. I am using their 1-mm diamond mesh (Part F11) on several of my new HVAC enclosures. You can buy these from a number of sellers, including the excellent Model Dockyard (you can see their line at: https://www.model-dockyard.com/acatalog/Scale_link_Mesh.html ); their part number for the F11 mesh is SLF11.
With the preliminary modeling work done on the three enclosures cut from the diesel shell, I sprayed on what I think of as a “witness coat,” using Tamiya light gray (AS-26), to show up any shortcomings in the modeling parts so far. As you can see below, I did need to use a little Squadron Green putty to fix a couple of problems. The enclosure on the left has the Scale Link screen. (You can click on the image to enlarge it,) 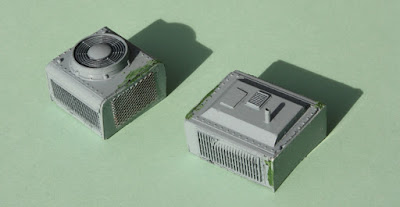 Once the putty is dry and sanded, another coat of gray can be added. Shown below are all three of the finished enclosures.

A final point on enclosures like these: though most of the ones you see on roofs appear to be maintained, occasionally you do see a few with rust stains, and certainly soot and other dirt falls out of the sky onto these things. A few “new looking” ones are fine, but most should be at least a little dirty, and a rust stain or two won’t go amiss. I used Pan Pastels for this job. One of the things I like about their weathering colors is that they use the conventional art names for colors, such as Burnt Siena, Raw Umber, Neutral Gray, etc. Thus these fit right into the spectrum one is familiar with for tube acrylic paints and artist’s pencils. Pan Pastels may have originated as cosmetics, but the material is terrific for weathering, and their applicators are very nice to use. Here are these three enclosures, lightly dirtied and with a touch of rust.

Although the origin of these enclosures as diesel locomotive parts can be recognizable, most HVAC packages on the roofs of model buildings tend to “look right” because of their general appearance and where they are, reducing the recognition factor. Here is a single example from my layout, on part of the flat roof extension of Caslon Printing, and certainly it is my hope that the HVAC enclosure blends in, rather than calling any attention to itself. The road here is Alder Street. 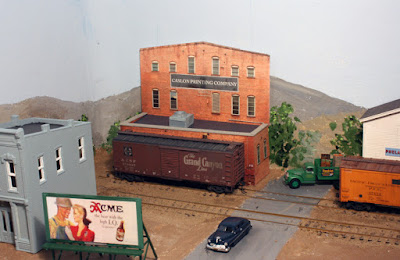 By the way, since I haven’t mentioned it for some time, I will point out that the flat for Caslon Printing started life as a KingMill flat, and it had to be modified to make the loading doors sit next to the track, as I showed in an earlier post (you can find it at: http://modelingthesp.blogspot.com/2015/05/pismo-dunes-road-part-4.html ).  That’s the origin of the flat roof.
I am happy with these HVAC enclosures developed from a diesel shell. But scratchbuilt enclosures are also effective for rooftop use, and I have a few of those on the workbench too. They will be shown in following posts. I should also mention the very useful Walthers detail set, their part number 933-3733, Roof Details. I will show some of its parts also.
Tony Thompson
Posted by Tony Thompson at 8:34 AM