In the previous post in this thread, I discussed the topic of understanding rail traffic for the automobile industry. This is just one example of distinctive rail traffic, which might use special equipment, or carry cargo with special needs, or operate in distinctive ways. That discussion can be found at this link: http://modelingthesp.blogspot.com/2017/12/understanding-auto-industry-traffic.html . As part of the discussion, I described some helpful sources of information about auto parts in particular.
I have already gotten an email asking why I did not mention the Jeff Wilson book chapter on this topic. The book in question is The Model Railroader’s Guide to Industries Along the Tracks, Kalmbach Books, Waukesha, WI, 2004, and among six industrial summaries it does indeed contain a 9-page chapter on the automotive industry. This book series (eventually there were four volumes, each with six industry chapters) is necessarily brief about most industries, and though I am not aware of any shortcoming in these books as far as accuracy, I will admit I have heard them described as “overviews from 30,000 feet.” That’s a little harsh. First of all, many modelers don’t want a lot of detail, and of course covering six industries in 88 pages per book cannot avoid pretty abbreviated descriptions. But as a starting point for any of the 24 industries in the four books, I would definitely recommend these books. Just don’t look for depth.
In that previous post (cited in the top paragraph above), I showed a Southern Pacific Class B-50-30 box car newly fitted with racks for Buick axles and lettered “return to C&O Ry.” I also showed a table of California auto assembly plants, one of which was the Buick-Oldsmobile-Pontiac plant in South Gate. As I said then, this is already enough information to make up a waybill. Here is an example: 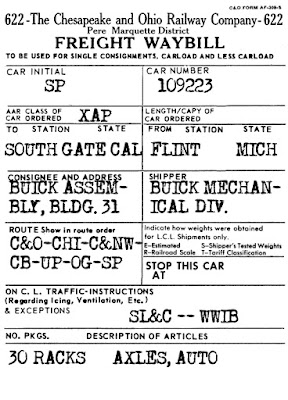 This is only an example bill, because I have not yet completed the B-50-30 kitbash on my workbench; but it illustrates one way to waybill auto parts traffic.
For more about auto parts sources, one can turn to the helpful table in the Walthers book, America’s Driving Force, that I showed in the previous post. This is a terrific resource. It show the company names and locations of a wide variety of parts suppliers, many supplying parts to more than one auto company. Shown below is a waybill made up from information in this table. 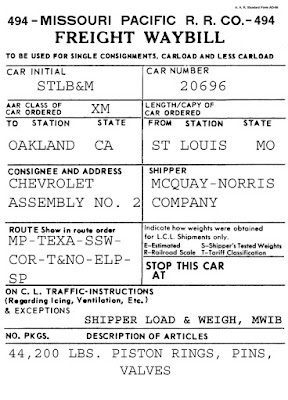 Note in both of these waybills that the routing takes the car over the Coast Route. The first one I showed, with the Buick axles, was routed over the Overland Route, as were most auto parts in the early 1950s, and then from the Bay Area to Los Angeles. The second waybill shows a routing via the Cotton Belt and over the Sunset Route to Los Angeles, then up the Coast to Oakland.  Might either of these loads have been routed via the San Joaquin Route? Generally, the faster Coast was preferred by SP for hot loads like auto parts.
Lastly, there were also shipments of completed automobiles. The California assembly plants served not only that state but also the rest of the West Coast, along with parts of the Mountain West. In addition, automobile models manufactured in smaller numbers, such as convertibles, might not be assembled in the West, and would have to be shipped to the West from Detroit or other midwestern or eastern plants. This opens up the opportunity for a wide variety of waybills; I will show just one, which is destined to an on-layout team track. 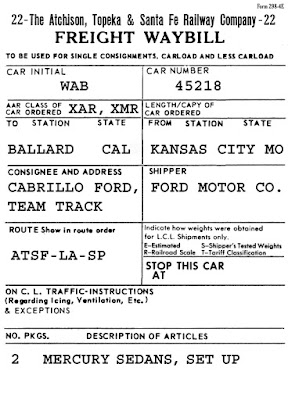 I enjoy learning about different kinds of freight, automobiles and auto parts in this instance, and overview books like the Walthers book are a great help with perspective as wall as specific facts. Through trains on my layout’s SP Coast Route main line now include cars and realistic waybills for different kind of automobile traffic. In a future post I will address the freight cars that are involved.
Tony Thompson
Posted by Tony Thompson at 9:53 AM