I have mentioned several times in past blog posts that gondolas were often used for lumber loading along Southern Pacific lines. These were of course less convenient to load as well as to unload, but were pressed into service when there were not enough flat cars. Many prototype photographs testify to this practice, and I will include here one such photo, one I have shown before. The reason to repeat it will be evident in a moment. It is an SP company photo in southern Oregon (negative N1660-14), of a train headed to California with many loads of lumber. 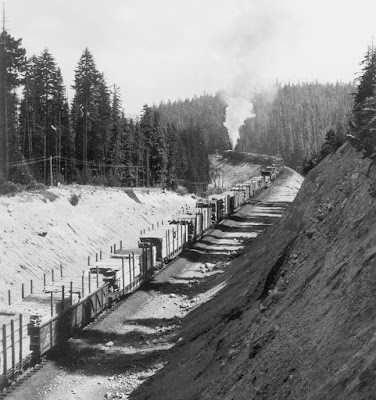 Note in this photo that there are at least 7 gondolas carrying lumber. But of particular interest is the one nearest the camera, which is a Louisville & Nashville gondola. Naturally the reason(s) this car was in Oregon and could be confiscated for loading are lost to time, but cars like this were certainly free-running cars and could have been loaded anywhere, and then moved anywhere else.
I decided I would model one of these cars, and use it for lumber loading, among other things. How much can we learn about this car from the photo above? Here is an enlargement of just the gondola (you can click on these images to enlarge them further, if you wish).

The car number can’t be read in its entirety, but clearly the first two digits are 74. Note also the center panel of the car side, which has no diagonal brace. This is a well known spotting feature of the composite GS gondolas designed by the USRA (United States Railroad Administration) in connection with World War I.
It’s thoroughly documented that L&N received 1000 cars of the USRA composite gondola, numbered 74000–74999, and these cars remained in service, still with wooden side sheathing, into the 1950s.They were accompanied by an additional 1000 cars that were USRA clones, the 73000 series, and as late as 1950, 1523 of these original 2000 cars were still in service.
I had an InterMountain styrene model of the USRA gondola, so decided to letter it for L&N. (I don’t know if IM has ever offered this model in that lettering.) I had an old Champ set, no. HN-72, and used the lettering there for this car. The lettering obviously is simple, so this was a quick job. Once lettered, I weathered it fairly strongly, on the basis of how the car looks in the photos above, and in view of the car’s age.

This car was chosen for modeling on account of the lumber load in it, in the photo at the top of the present post, so I decided to see how the recent Owl Mountain “narrow” lumber load would fit into it. (I reviewed this kit a few posts ago: https://modelingthesp.blogspot.com/2019/04/lumber-owl-mountains-recent-kit.html .) As I had hoped and expected, it fit fine, as shown below.

By the way, the prototype photo at top shows a load in this car which is considerably shorter than this Owl Mountain load, and I will return to shorter lumber loads in a future post.
I now have an intriguing car to carry lumber to customers on my layout, a car owned by a railroad distant from my California setting, but one that vividly illustrates what it means for a car to be a “free runner,” as most gondolas were in fact.
Tony Thompson
Posted by Tony Thompson at 8:15 AM