It’s impressive how often sharp eyes will find any errors one may make in modeling. My friend Arved Grass certainly has such a pair of eyes, and he caught me. One of my reefer models, PFE 6352, was shown being loaded with wine in barrels in the post on “Wine as an industrial commodity” (here’s a link: http://modelingthesp.blogspot.com/2012/02/wine-as-industrial-commodity.html ). What did Arved catch? The paint scheme was wrong. I’ve now corrected that post (more on that in a minute), so let me explain.
First, what was wrong with the original photo? In PFE’s paint scheme from 1946 to 1951, which was the first with both railroad emblems on both sides of the car, the SP emblem was always nearest the door, on both sides of the car, and the UP emblem was nearer the car end. It’s convenient for model manufacturers, of course, because the two car sides are identical, unlike the period 1922–1946 and the time after 1951, when the two sides were not identical. In 1922–1946, each railroad’s emblem was on one side only; after 1951, with dual emblems, the SP emblem was toward the “B” end of the car on each side. But my model is wrong, because it has the 1946-1950 paint scheme, but with the SP emblem reversed in location.
Though reluctant to dredge it up all over again, I suppose I should exhibit the blunder one more time. If nothing else, it may serve as a cautionary tale to anyone applying lettering to a PFE model. Here ’tis.

How did this happen? I decaled this upgraded Athearn car years before I wrote my parts of the PFE book, and long before I entirely understood PFE paint scheme eras. So the error is mine. Little by little, older cars on my layout are being replaced by better, newer models, but this one, having open ice hatches, hasn’t.
But this same photo was used in my article on waybills in Railroad Model Craftsman (December 2009, pages 71 to 77), and in this photo in that article, the paint scheme is correct. What’s going on? Simple. In preparing that article, I realized the model paint scheme was wrong, and the simplest and fastest fix was just to correct the emblems in the photo, using Adobe Photoshop: I cut and pasted them into the right places, meanwhile correcting the oversize SP emblem from that particular old Microscale decal set. So here is the published version of the photo: 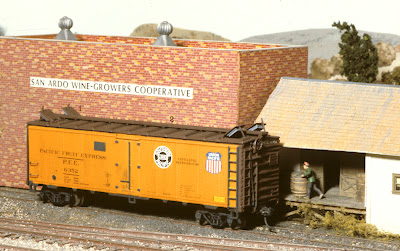 It’s worth pointing out that neither of these photos has been used to say anything about PFE paint schemes; they were used to illustrate loading wine barrels into refrigerator cars. But of course all the modeling ought to be correct. I have replaced the offending photo in the “Wine” post cited above, and added a link to this post you are reading to explain why it has been changed.
Part of the irony of all this, of course, is that PFE paint schemes are laid out very thoroughly in the PFE book, of which I was principal author (Pacific Fruit Express, 2nd edition, by Thompson, Church and Jones, Signature Press, 2000). The scheme under discussion is on page 185, and all the schemes are given a quite complete summary on page 418. But as I said, this model was completed well before the book. Because of its attractive feature of open ice hatches, I will likely correct the emblems on this model, rather than replace the car, but it will nevertheless be restricted to “mainline” service. (I discussed that distinction between less-accurate or less-well-detailed “mainline,” versus “all service” freight cars, in an earlier post, at: http://modelingthesp.blogspot.com/2010/12/upgrading-old-models-3.html .)
I guess the only lesson I can draw from this problem is urge the modeler of today to take account of all the knowledge that’s out there. And of course admonish myself once more to double-check photos of older models before posting.
Tony Thompson
Posted by Tony Thompson at 10:18 AM