I get questions occasionally about older models, usually those with some prototype accuracy which remains desirable today. One manufacturer in this category is Thomas Industries, selling models as “Thomas Trains.” Their tank cars were formed sheet steel, with cast white metal underframes, tank ends, and domes. Smaller parts were all metal. I am told that they offered undecorated cars, though all models, ads, and printed materials I have seen only show decorated cars.
Thomas Industries was founded in New Jersey by Jim Thomas in the late 1940s (Jim was a founding partner, with John Tyler among others, of Mantua Metal Manufacturing). Originally the company built O scale models. In 1951 Thomas acquired Scale-Craft and Company, a maker of O scale rolling stock, and the entire company moved to a new facility in Shawnee, Oklahoma. The O scale freight cars were produced until 1964, when the dies were damaged in a fire (Jim Thomas had died in 1959 and the company was in other hands thereafter). What proportion of their line was HO scale, I haven’t been able to determine.
To give some idea of their product range in the early 1950s, I reproduce below both sides of a flyer which was in one of the Thomas kits I have. Clearly the 701 model was a conventional single-dome tank car, the 702 body an insulated car with a dome platform, and the 706 body a six-dome insulated car. There was also a three-dome car but I’ve never seen one. (You can click on this to enlarge it.) 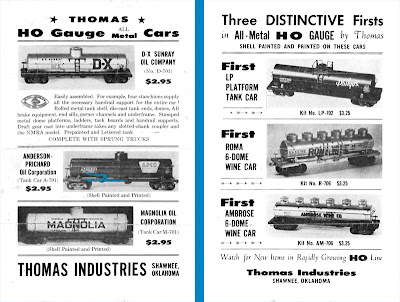 The letter with each model designation indicated the lettering. For example, the 701 tank car for Magnolia was M-701.
For collectors, it may be of interest to show some kit boxes. I have two for Thomas cars, a somewhat yellow one for a Magnolia car, which I think may be a later box, and the other for one of the Roma six-dome wine cars. 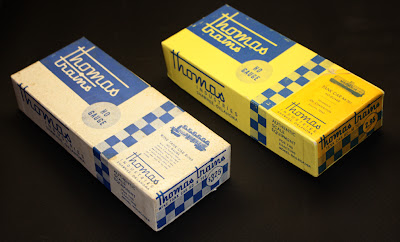 The interior of the Magnolia box is interesting because it is a kind of “presentation” of the tank, showing only the dome, tank + underframe, and trucks (earlier kits did not include trucks). All the other parts are in a plastic bag underneath, except the wire handrails which are loose. Not sure I’ll build this one, so maybe I will sell it.

The kit I’m going to describe is a six-dome Roma car (kit R-706). I showed my in-service model of this car, posed at the winery in my town of Ballard, in a prior post about wine as an industrial commodity for modelers (here’s a link: http://modelingthesp.blogspot.com/2012/02/wine-as-industrial-commodity.html ). I have also acquired a couple of unbuilt kits of this car.
The six-dome kit parts are shown below. As I got it, this kit had no handrails, but these are easy to fabricate from wire. I am not showing all domes nor all screws and washers. 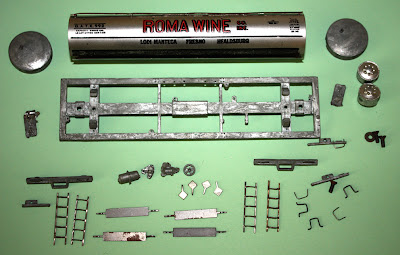 The kit directions are simple and straightforward, showing that the kit is not complex to assemble. The exploded drawing shows clearly what to do (trucks are not included). 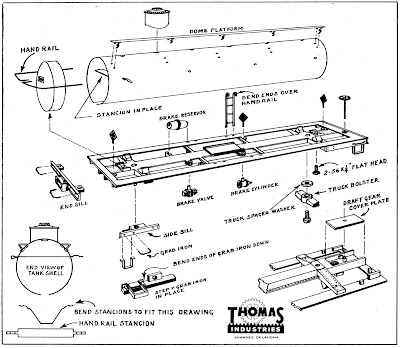 Here is the text, setting out the steps in assembly. 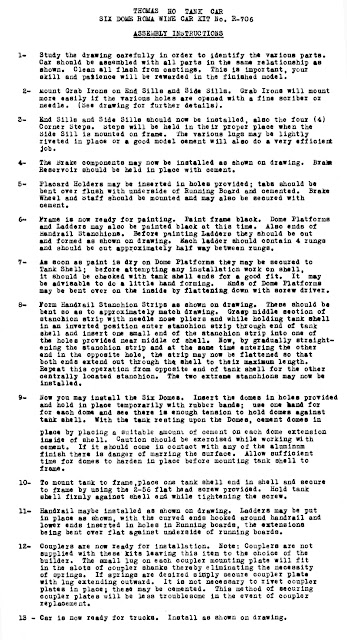 Some years ago I picked up a Thomas wine car at a swap meet, which had been built at some point, but was damaged, with three domes missing. A friend in Pittsburgh simply made a mold of a dome, and cast me a whole bunch of them, enough to cover any reasonable need. And now that Owl Mountain Models makes an excellent elbow vent of the kind used on these cars, we can equip such domes with proper hardware. Here is a link to Owl Mountain’s web page about these parts (scroll down to see them): http://owlmtmodels.com/. The Thomas parts I received look like this: 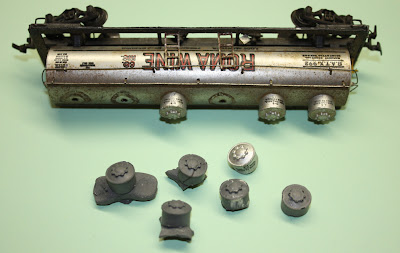 The original domes have a pin which locates in the hole atop the tank, but the replacement domes are glued flat onto the car. You will note that the car needs a number of repairs and upgrades, obviously a future project, but I kind of like the real rust on the tank, and will leave that as it is.
One inquiry I received was from a modeler interested in building one of these cars in another scale than HO. To help with that, I measured the kit parts.
Here are some dimensions.
Underframe: length, 39' 10"; width, 9' 6"; trucks, center to center, 29' 6"
Tank: diameter, 6' 9"; length of cylindrical part, 35' 10"
Domes: diameter, 3' 3"; minimum height of cylindrical part, 18"
Center to center spacing of domes in car middle: 6'
Walkways: side, 11" wide; dome, 8" wide
The Thomas Trains tank cars do show up at auctions and swap meets, and of course in on-line sales (though then you can’t be as sure of condition). They make up into pretty good models if not already built, and if built, can readily be upgraded to fill gaps in the available tank car models we have.
Tony Thompson
Posted by Tony Thompson at 1:04 PM