Upon posting my prior commentary about Thomas Industries HO scale tank cars, which were sold under the name Thomas Trains (here is a link: http://modelingthesp.blogspot.com/2012/07/thomas-industries-ho-scale-tank-cars.html ), I promptly received a reminder from a friend of another Thomas car that I own, and that I often include in my slides for operations clinics at conventions. My friend was surprised I had not included this car in the previous post. So here it is.
It is what Thomas called a 702 body, an insulated car with a high-pressure valve bonnet and “dome” platform (the valve bonnet is not an expansion dome). Here is the car, lettered for chlorine service, which I acquired years ago in derelict condition and cleaned up. Note that the valve bonnet is scale size, unlike the familiar Athearn “chemical” car, which is produced with a valve bonnet approximately double scale size. (I’ve discussed that topic previously, including corrective measures, and if you’re interested, you can view the post here: http://modelingthesp.blogspot.com/2010/12/upgrading-old-models-2.html .)

The paint scheme, of blue and maroon, appears to match a deteriorated AC&F color print I have (more on that in a moment). Moreover, the lessee, Columbia Southern, is an interesting topic too. The company had its origins in two companies. One was the Pittsburgh Plate Glass Company (which would become PPG Industries in 1968). In 1899 PPG formed a subsidiary to manufacture soda ash (soda ash is a raw material in glassmaking). It was called Columbia Chemical Company, of Barberton, Ohio, and for some years PPG operated it as a separate division. It owned tank cars, and continued to produce alkali products as well as chlorine. (The process used was electrolysis of sodium chloride, in the form of brine, producing chlorine and sodium hydroxide, or caustic soda.) Below is an AC&F photo (courtesy Richard Hendrickson) of one of their tank cars, built in 1942, with reporting marks PPGX. 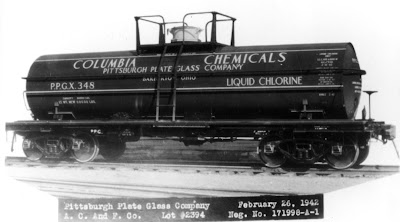 Another thread in the story was Southern Alkali Corporation, of Corpus Christi, Texas, makers of chlorine. They apparently used the electrolysis process also, and thus also produced caustic soda. They too owned tank cars, reporting marks SACX, as with this one built in 1940: 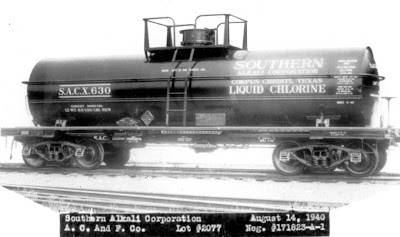 Southern Alkali was formed in 1931 as a joint property of PPG and American Cyanamid and Chemical Corporation. In 1951, the 49 percent share in Southern Alkali owned by American Cyanamid was acquired by PPG, which then combined Southern Alkali with Columbia Chemical to form Columbia-Southern. (Eventually it would become part of the Chemicals Division of PPG.) The large chlorine plant of Columbia-Southern at Lake Charles, Louisiana was part of PPG’s status as the second largest producer of chlorine in the U.S. (behind Dow Chemical).
What is interesting is that the combined company, Columbia Southern, continued to use the Southern Alkali reporting marks, SACX, but with lettering and color scheme like the PPGX cars, with a large side stripe. Here is that deteriorated color print I mentioned, in which much of the dye is badly faded to brown. Obviously one cannot trust the color, but the overall appearance is pretty clear, and does seem to support the factory paint on the Thomas HO scale tank car. 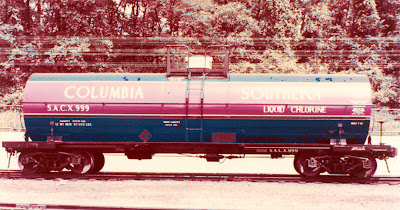