With the model work about completed (except for application of the etched metal running board), as described in Part 2 of this series (here is a link: http://modelingthesp.blogspot.com/2012/07/shake-n-take-kcs-rebuilt-box-car-part-2.html ), I proceeded to painting.
I washed the model gently, with a few drops of dishwashing liquid in lots of water, and dried it outdoors in the sunshine. This removes any fingerprint oils accumulated during model work. Once it was dry, I used drafting tape to mask the roof. (What is called “masking tape” has a much stronger adhesive than drafting tape, and that degree of adhesion is undesirable for some uses–so I usually use drafting tape.) I then airbrushed the body with Floquil Boxcar Red, with my old Badger airbrush. It’s a single-action, external-mix, utterly basic airbrush, which I use for this kind of overall painting job. I also have and do use a nice double-action Thayer & Chandler brush, but normally only for weathering.
As I was about to airbrush the model, I was reminded of a friend who asked, at the time I lived in Pittsburgh, if I could give him a couple of tips on airbrushing, since he was trying to learn. I immediately said, “Here’s my two rules for successful airbrushing. First, after use, clean the airbrush carefully. Two, clean the airbrush really thoroughly.”
That may sound like the answer to a different question, but here’s why I put it that way. I think paint application can be learned fairly quickly with a little practice, but keeping the airbrush clean is essential no matter what you’re doing. And in fact that’s one thing I like about my old Badger brush–it’s very easy to clean.
As soon as the paint had dried somewhat, I removed the tape. Once painting is done, further adhesion time by your tape mask does you no favors. Then let the model dry thoroughly. Since the roof at this point was still unpainted black plastic, I could rest the model on the roof in the sunshine to get it really dry. I follow the old adage, “If you can still smell solvent when you sniff the model, it isn’t dry yet.” I then added a light coat of Floquil Gloss for decaling.
The “Shake ’n’ Take” kit included a nice set of Kansas City Southern decals. These were originally created by Erich Kote of Digital Fox and were available from 5th Avenue Car shops. A suitable decal set is available from Jerry Glow (at: http://home.comcast.net/~jerryglow/decals/full.html ; scroll down to KCS). It’s also possible that a usable set can be purchased from Oddballs Decals (http://mopac1.tripod.com/oddballs3.htm#KCS ), although I can’t find the decal set number on the site. So to order, you should contact Tom Stolte, owner of Oddballs, at: <mopac12@gmail.com>, and clarify the status.
The lettering is fairly simple. Here is a car drawing, done originally by Jeff Koeller for Mainline Modeler. With permission, it was included in the kit directions (the complete directions are available on Google Docs at this link: https://docs.google.com/file/d/0Bz_ctrHrDz4wenUyOEphUE9ndDg/edit ).

Then the last bit of modeling was to install Kadee #58 couplers and the Accurail kit trucks, with Reboxx 0.088-inch wheelsets, as I normally do with freight cars. Then I attached the etched-metal running board with model airplane canopy cement, and painted it black. An overall coat of Floquil Flat protected the lettering.
Finally, I applied my usual acrylic-wash weathering, to reflect a car in service for four years (from the rebuilding time of 1949 to my modeling year of 1953). It is also just inside the reweigh time span for this car, which would be 48 months. A clinic handout, from the joint presentation on weathering techniques by Richard Hendrickson and me, is available at this link: http://modelingthesp.blogspot.com/2011/10/weathering-clinic-handout.html . And with all that completed, I added a small square of colored paper as a route card on the door.
Here are two views of the completed model, on my layout at the town of Ballard. I think the second one shows detail a bit better. 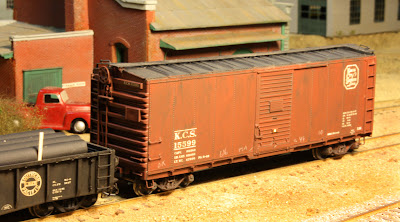 Would you like to do this project? Although it’s no longer possible to obtain a 2006 “Shake ’n’ Take” kit, you can acquire all the major parts. You would need an Accurail 40-foot AAR box car kit (any 3500-series car; they offer it undecorated) and a fishbelly USRA underframe, which you can buy separately as part 105. In my first post in this series, I gave contact information for purchase of the resin side sills from Chad Boas. Lastly, as mentioned, decals are available from Jerry Glow.
Before closing, I should mention that a second article about modeling this car was published by Railroad Model Craftsman, by Mont Switzer (April 2009, pages 89 to 93). Mont’s approach is much the same as Greg’s (as cited in the first two installments on the KCS model in this blog), except for using a Branchline box car body instead of Accurail. This provides slightly more accurate ends and has separate ladders and end detail. Some may find it a more satisfying approach.
This project probably doesn’t meet Greg Martin’s original criterion of a “weekend project,” but it is a fairly simple and straightforward modeling job, and results in an interesting freight car. I enjoyed it, especially as enhanced by Chad Boas’s excellent side sill castings. And thanks again, Greg, for your idea, and all your work in bringing “Shake ’n’ Take” to reality.
Tony Thompson
Posted by Tony Thompson at 3:44 PM