In an earlier post, I wrote about the early bulkhead cars SP built in 1949 at its own Los Angeles shop from existing flat cars of Class F-70-6. Here’s a link to that post: http://modelingthesp.blogspot.com/2011/09/early-sp-bulkhead-flat-car.html . My emphasis in that post was on the HO scale models of the 1949 cars, then being introduced by the Southern Pacific Historical & Technical Society (SPH&TS). Now I want to carry the subject further.
I will begin by showing the prototype 1949 bulkhead on the left, and on the right the as-built but unpainted SPH&TS bulkhead, constructed from the kit. Grab irons and ladders had not been added to this model bulkhead, so that the construction arrangement would be as clear as possible. This is the bulkhead style shown in my prior post, with the link above.

The SPH&TS offered the combined F-70-6 flat car, and the 1949 bulkheads, as a ready-to-run car at one time. Just to show how this looks as a completed car, here is the superb photo taken by Paul Lyons of one of these models. Society members will have seen this photo as part of the promotion for the models.

In the years after 1949, SP found demand increasing for bulkhead cars, and continued to convert flat cars in its own shops for this use. Originally intended to carry plasterboard, and heavily used for that traffic, the cars also soon found use for a wide variety of other cargoes, including lumber.
There were minor changes to the design of the bulkheads in the years between 1949 and 1956, but in that year an entirely new bulkhead design was introduced, completely of welded steel except for the vertical face of the bulkhead.
The SPH&TS has commissioned a kit for the 1956 bulkhead, and this kit is about to be announced. Here again is the prototype car end on the left, and the SPH&TS kit bulkhead, unpainted, on the right. Grabs and ladder are installed. Note the odd-looking angled grab iron at the right edge of the bulkhead, on both prototype and model. (You can click on this to enlarge it.)

This was followed in 1962 by an SP design which was structurally similar but considerably taller, 8 feet, 6 inches above the car deck, instead of the previous height of 6 feet, 4 inches. (Some 1949 bulkheads were less than 6 feet high.) Not only did SP build this 1962 design in its own shops, but later provided blueprints to Gunderson and others to construct new, not rebuilt, cars with this same bulkhead. Accordingly, it’s an important bulkhead for 1960s and later SP modelers.
In the same pattern as shown above, I compare below the prototype 1962 bulkhead on the left, and the SPH&TS bulkhead kit, with grabs and ladder, on the right. (Both the 1956 and 1962 model bulkheads shown here were built by me.) 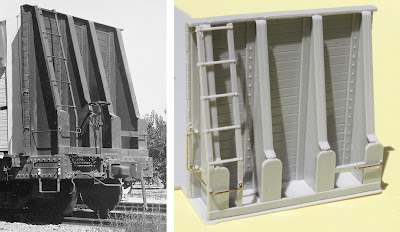 As I’ve stated above, the SPH&TS is about to introduce kits for both the 1956 and 1962 bulkheads. These are much like the 1949 bulkhead kits which are still available (see link above) in that they comprise styrene parts which are easily glued together and attached to a styrene car deck (they are not designed to be attached to wooden model decks). For modelers of a range of eras, these fine bulkhead kits permit creation of a distinctive Southern Pacific freight car.
Tony Thompson
Posted by Tony Thompson at 9:01 AM