I mentioned in my description of the BAPM (Bay Area Prototype Modelers) meet, which was held on June 23, that I had been struck by Paul Chandler’s display of fine-looking lumber loads, and an impressive, well-thought-out method of making them (if you’d like to look, here is a link: http://modelingthesp.blogspot.com/2012/06/bapm-bay-area-prototype-modelers-2.html ).
I stated then that I hoped Paul’s article about the method would be published in the Southern Pacific Historical & Technical Society magazine Trainline. I guess I should have checked with the magazine before posting, because it was indeed in the process of being published, in the issue then at the printers! That issue (No. 112) has now been delivered to members, and non-members can buy it at hobby shops which carry it, or directly from the Society on its web site: http://www.sphtsstore.org/servlet/the-Trainline-back-issues/s/105/Categories . The latest issue (which is dated Summer 2012) hasn’t been added to the catalog yet, but no doubt it will appear there within a week or so, as soon as the overprint copies arrive at SPH&TS.
Paul was generous enough to share some of his photos for my use. Here’s a perspective view of one of his loads. You can see the “crayon” markings on the sides of the load.

Here’s a view of two loaded bulkhead flat cars on Paul’s layout. These cars originally had the bulkheads added by SP for plasterboard service, but it was not long before lumber shippers discovered their utility for lumber loads. 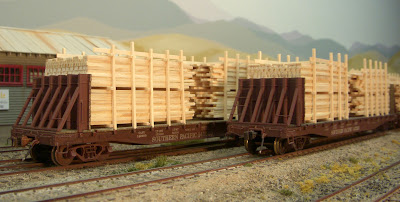 These bulkhead cars, with SP’s 1949-design bulkheads, are SPH&TS special run cars in HO scale. You can buy both the cars and the bulkhead kits from the Society at: http://www.sphtsstore.org/servlet/the-Models–Misc/Categories .
The range of forest product loads that a person may wish to model obviously depends on the region being modeled, and the era. In places far distant from logging territory, railcar loads will be restricted to cut lumber, either rough or finished. The rough lumber was shipped on flat cars, and finished material mostly moved in box cars in the 1950s, but both rough and finished lumber moved on flat cars once packaging of lumber loads became commonplace.
In the logging territories, however, there can be a full range of loads. I know of no better example than this photograph of the Eugene, Oregon yard in July 1943. It’s an SP photo, and this print was provided by Arnold Menke, though I know other collectors have copies also.

The footpath alongside the ladder track is an interesting detail to model (and notice those handsome high switchstands along the lead). A close-up may help, so let’s look at a larger view. You can click on either image to enlarge it.

Note the logs in gondolas, seen almost end-on at photo center, and the numerous loads of poles (or pilings) on flat cars at right. At left, by contrast, are two flat cars of cut lumber, one carrying very large timbers, the other more conventional building material sizes. There is also a gondola of pretty large cut lumber just to the right of the log car string.
This photo appears to be the far west end of the yard. If you would like to learn more about the Eugene yard, there is no better source than the book by Ed Austin and Tom Dill, The Southern Pacific in Oregon, page 108b and following, published by Pacific Fast Mail, Edmonds, Washington, in 1987, and often available from used book dealers, on line and otherwise.
This 1943 photo suggests a wide range of forest products loads which might be appropriate for modeling, if your modeled location is anywhere near logging areas; and even if you are not in such an area, all these loads but the logs can be realistic loads for your cars. And by the way, modelers who have built lumber loads board-by-board will be especially pleased to see those big timbers in a couple of the loads.
Tony Thompson
Posted by Tony Thompson at 3:55 PM