Over the past months, I have received from time to time questions about prototype documents having to do with freight shipments and waybills, or in some cases I’ve been sent examples. This post is to clarify which documents are which, and what they mean.
The primary document of value to most of us who are interested in operation is the Waybill. This is a contract between shipper and railroad for the carriage of the cargo, provides all routing and billing information, and states specifics about the cargo. Sometime in the 1930s, this became standardized through the auspices of the Association of American Railroads (AAR). Certainly for anyone studying model operations from, say, 1940 to the 1960s, that standard form is essential and was used with few variations of any significance by every railroad in North America. After the mid-1960s, Waybills underwent various changes but did remain standardized.
Here’s an example of an actual waybill. It was sent to me by Frank Hodina, is dated 1961, and is for a Wabash box car carrying bulk soybeans. It would have been collected by the conductor of the train picking up the box car, and would have traveled with conductor after conductor until it reached its destination. 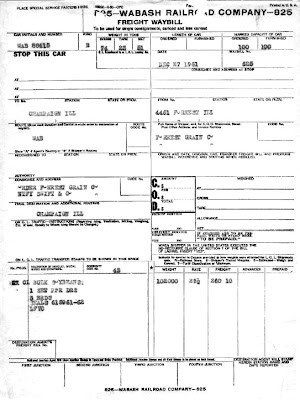 But there are other documents out there too, similar to the Waybill in some ways but not the same. The commonest one which people seem to find is the Freight Bill. This document was used to collect freight charges after delivery of the cargo. And whereas the Waybill is prepared by the railroad which picks up the load and sends it on its way, the Freight Bill is normally prepared by the railroad which delivers the cargo. That might be the same railroad, or one at the other end of the country. The Freight Bill format was not standardized and one can find many different shapes, sizes and content in these bills. Here is a 1952 example for a crate of machinery, sent to me by Dave Salamon: 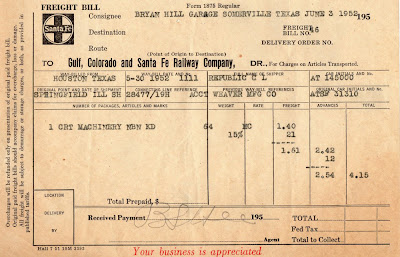 It can be seen at once that this is an entirely different document than a Waybill. I guess it is the fact that its name contains the words “Freight” and “Bill” that people jump to the conclusion that it is a Waybill, but clearly it is something different.
Lastly, there is a document which is more like a Waybill and in fact acts as a predecessor to a Waybill, but is nevertheless distinctly different, the Bill of Lading. Here’s a Soo Line example provided by Bob Sterner: 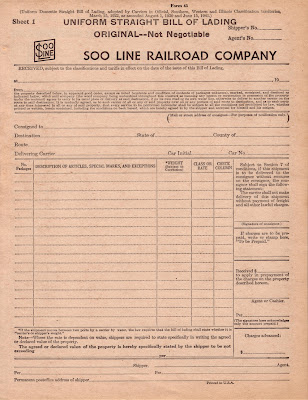 This was also a standard document, and like the Waybill, has its reverse entirely covered with very fine print, most of it dense legalese, and like the Waybill, functions as a legal contract. But its format and content are significantly different than a Waybill.
What can you learn from these? Of course, only the Waybill gives us the core information about freight shipments. But all three of these can provide the distinctive railroad headers for each railroad company, all are certainly collectible, and if you have no other source, they can begin to acquaint you with the content of these freight documents. (Word of warning: typography of one document, such as a Freight Bill, may not be the same as Waybills from the same company.) But for most of us, the Waybill is the one that provides the most and best information, and rightly so, since it is the one that documents the rail movement fully.
Tony Thompson