When I last described this project, the underframe and brake gear changes had been made, and the body interior braced to have parallel sides. I also trimmed off the “tabs” of the side sill, as indicated in that first post: http://modelingthesp.blogspot.com/2012/07/shake-n-take-2006-project-kcs-rebuilt.html . Incidentally, I found it easier to slice them off with a razor saw, rather than trying to cut or file them away.
My next step was to attach the weight. I prefer to keep car weights away from potential use of screws to attach trucks or couplers. With full-carlength weights like those provided by Accurail, I simply hacksaw them in half, file smooth, and glue them piggyback. For dissimilar materials like the styrene car floor and the steel weight pieces, I like to use model airplane canopy cement.

The Chad Boas side sills, described in the first post, are lovely parts, with excellent detail. They are just a little too thick to fit between the Accurail underframe and body used for this project, so I gently sanded the backs of them, using an old glass plate as a flat surface under the sandpaper:

Once that was done, the sills were placed alongside the Accurail floor assembly and cemented in place with CA. The nice fit of the sill details to the car body is shown pretty well here. To repeat, use of these sills is the major departure I’ve made from Greg Martin’s clear and detailed “Shake ’n’ Take” directions (a link to a PDF of the directions on Google Docs was provided in the first post, cited above). 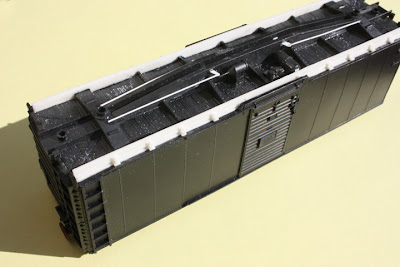 With the body assembled, I next added sill steps, using A-Line Style A steps. Greg’s directions depict the use of a support block, similar to a method I also use (see: http://modelingthesp.blogspot.com/2011/12/modeling-project-m-box-car.html ). These are needed to assist in getting the steps as close to the front surface of the sills as possible (the prototype steps were mounted directly on the side sill.)
My next step was body detailing. Greg’s directions show nicely his method of replacing ladder rungs with 0.010-inch styrene rod, but he didn’t show how the replacement of bracket grab iron rungs worked. I decided to try the method with the grabs, carefully carving off the cast rungs but saving the brackets, then applying the 0.010-inch rod.
I added a Universal brake wheel (left over from a pack of Kato covered hoppers), but if I were applying a new one, there is none better than the Kadee part. On the other hand, I like etched metal running boards better than the Kadee injection molded part, so I will use a Plano walk (the running board locating holes in the body were filled with the pins from the kit running board). I also used some of the 0.010-inch styrene rod in the “Shake ’n’ Take” kit to add a retainer line to the B end. Here is the car ready for the paint shop. The roof will be masked while the body is painted boxcar red, so the running board is not yet applied. 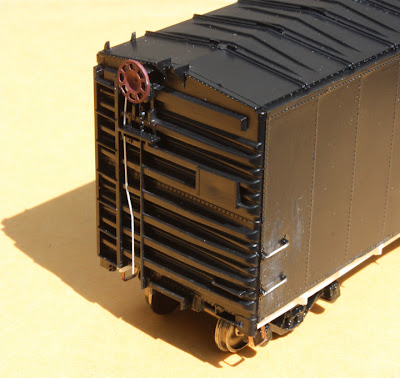 You can see the 0.010-inch styrene grab iron rungs and retainer line. The A-Line steps are also visible on both sides. The trucks are temporary.
I think I will stop here, since the painting and lettering call for a somewhat different discussion, and let this post complete the modeling part of the project.
Tony Thompson
Posted by Tony Thompson at 3:38 PM