The subject class, PFE R-30-9, consisted of rebuilt cars, drawn from several prior classes. Not only the older cars of classes R-30-11, -12, -13 and -14, but even the 40-ton cars of Class R-40-2, were the raw material for these rebuilds. What all these classes had in common was wood-framed superstructures. During 1938 to 1940, fully 7694 cars were rebuilt and reclassified as R-30-9 (or if they originally had 40-ton underframes, they became R-40-9, but this was a small minority of the total cars in the class). All cars in the class retained their original underframe, whether 30-ton or 40-ton, whether built-up or commercial Bettendorf type. They were numbered from 91022 through 98718.

The wood superstructure framing meant that the cars had limited lifetime, and by 1949, needed rework again. This time, all surviving cars, nearly 6300 of them, received the same kind of light steel framing in their superstructure as had many other PFE rebuilds, but receiving new wood tongue-and-groove sheathing. If you are interested in a more detailed account of this class’s history, or of PFE rebuilding in general, there is additional material in the PFE book (Pacific Fruit Express, 2nd edition, by Thompson, Church and Jones, Signature Press, 2000).
The reason I am briefly describing the class and its history is because many modelers seem not to recognize the importance of this class. Many are aware of huge classes such as the steel R-40-23 cars, of which fully 5000 cars were purchased, and obviously an important class to model. But perhaps because they were not bought new, the R-30-9 cars, more than half again as numerous as R-40-23, don’t seem to get comparable attention. But in fact they remained in service a long time, and as late as 1958, the class still contained about 3000 cars.
There is a good HO scale kit for this class, from Red Caboose, though strictly speaking, since it models a Bettendorf underframe, it can only model part of the class exactly. The class from which each individual car was rebuilt is tabulated in a PFE company document which is now at the California State Railroad Museum, so anyone wishing to choose entirely correct car numbers for their models can do so. When I worked on the PFE book, I made a copy of this document, so have checked my models in most cases to be sure they are of Bettendorf heritage. The car number for the kit described here is PFE 95740, a car which did have a Bettendorf underframe.
This kit, as it happens, was a special-run lettering version for a past annual meeting of the Southern Pacific Historical & Technical Society. The kit makes into a nice model. I won’t talk about the assembly process, as it is straightforward. The only modification I made was to model the ice hatches as open, something discussed in a previous blog post (you can see it at: http://modelingthesp.blogspot.com/2013/07/modeling-open-ice-hatches-on.html ). Then of course the model had to be weathered. Since the paint scheme is fairly recent, I have only weathered the car lightly. 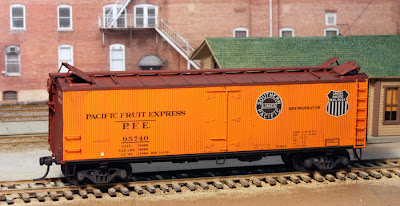 The car is shown behind the depot at Ballard on my layout.
Under my scheme of rostering one model for each 1000 prototype PFE cars, this group of more than 7000 cars in my model year of 1953 obviously calls for seven models. I don’t yet have all seven built, but four cars are already in service, and three more in the form of kits are on the shelf to complete the class. I certainly won’t be one of those who overlook this large class of PFE cars.
Tony Thompson
Posted by Tony Thompson at 4:01 PM