A roundhouse for Shumala, Part 5 — conclusion

A previous post reported completing the main roundhouse structure, including all roof sections. Most of the work followed kit directions. That post is at: http://modelingthesp.blogspot.com/2014/01/a-roundhouse-for-shumala-part-4.html .
At this time, then, I set out to build the chimneys for the structure. Up to this point, I had been impressed with how well everything in the kit fit together, and assembly had gone really well. The chimneys do not exactly fit that description. They are keyed so the sides can only be assembled in one orientation, which is fine, but the tabs on the square interior former are simply too large in any orientation. (And believe me, I tried many permutations and combinations of the assembly before realizing I had more work to do.) Tedious filing and fitting was needed to get these components together.
Once together, and with minor filing of the roof openings, they do fit into place nicely. The kit directions say that these chimneys were white, but the one color view I have shows more of a light gray, which is the color I painted mine. Here is a roof view to show how they look. 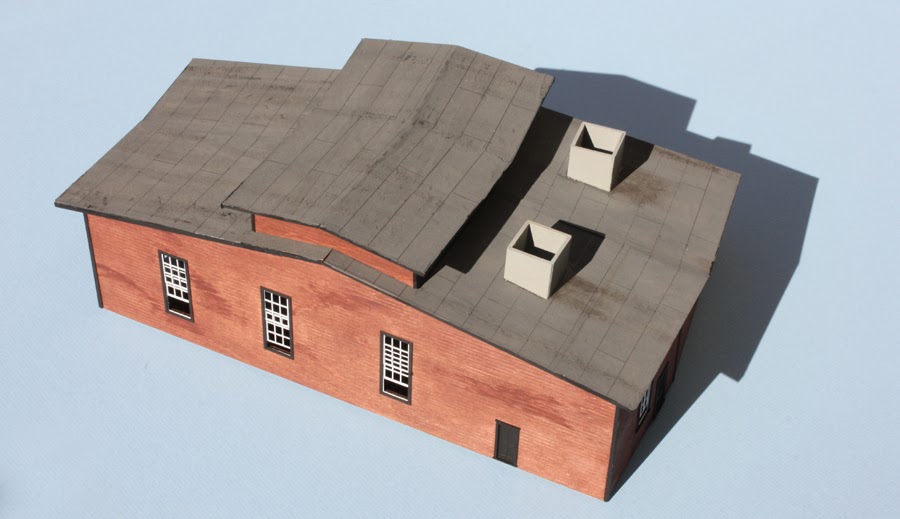 You can see that I have drybrushed the roof to accomplish some weathering.
The final part of the project is the smoke stack for the boiler house. My first reaction was that the stack is pretty tall, although photos of the prototype for the kit, Port Costa roundhouse, do show a stack like this. I then looked at boiler house photos from several places on the SP system, including San Luis Obispo, and all had stacks roughly twice the height of the boiler house below — which is just about how the height of the kit stack measures up. So I went ahead and built it as provided in the kit.
I decided to drill all the way through the stack, and use a single piece of brass wire to represent the guy wires on both sides. This worked fine. Once I had a little weathering on the stack, the project was complete. I will repeat what I have said in several places: this is an outstanding kit, which goes together well, has excellent instructions which include suggestions how to do things you might not be familiar with, and is very faithful to the prototype. I would recommend it to anyone beyond a total beginner.
Installation on the layout is shown in the photo below. Ballasting and some detail work on the surroundings remains to be done, along with a coal pile for the boiler house, but it’s nice to see the structure in its location. Tracks were wired some time ago, and I verified that engines can run freely in and out of the house. This view shows Ten-wheeler 2344 almost entirely inside the house (it will fit all the way in, if desired). 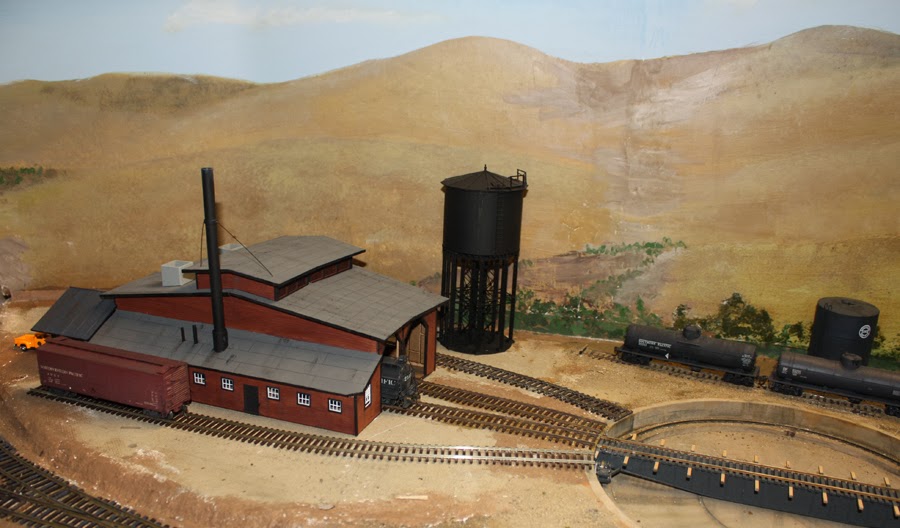 The foreground track, serving the shop, remains to be weathered. In the background is a Precision Scale brass Harriman water tank, the water supply for the water column on the outbound engine track. Also at right are some SP tank cars, delivering locomotive fuel.
From an angle to the rear of the structure, the loading dock and machine shop are readily visible, once the box car in the view above is removed. Again, the area around the building remains to be scenicked. 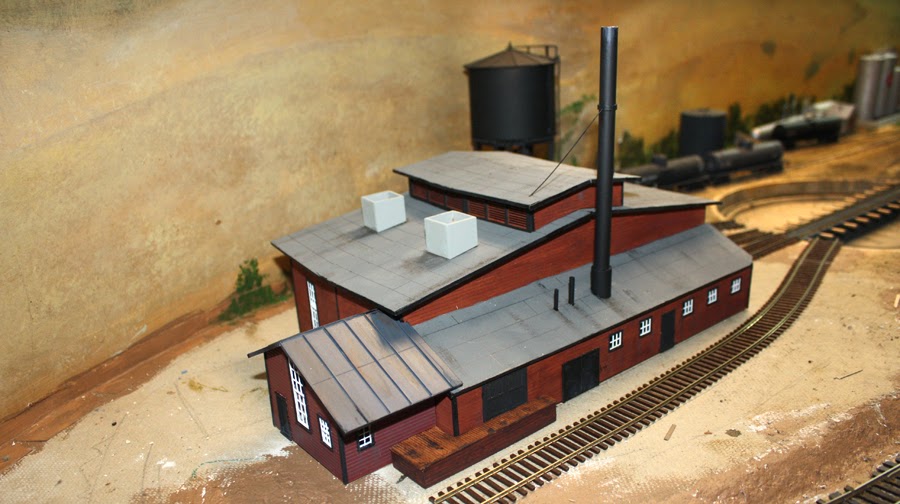 This roundhouse is the centerpiece of my Shumala engine terminal, and applying scenery around it will complete it. The only thing then remaining to add to the engine terminal is a sand house, which is on my near-term “to do” list.
Tony Thompson