A train trip across Europe

In a previous post I described part of a two-week visit my wife and I made to Ireland in September. A description of the Dublin part of that visit is at this link: http://modelingthesp.blogspot.com/2014/09/a-visit-to-dublin.html . A couple of days after that trip ended, we were to start another week’s visit to Barcelona, Spain. We could of course have just gotten a plane flight from Dublin to Barcelona. But we thought we could probably do something more interesting. Here’s what we did.
First, we did depart Dublin by air, flying across the Irish Sea almost due east to Manchester, in the center of the English Midlands. The Manchester airport has a train station literally on the airport grounds, and has frequent service to a number of nearby cities. We took one of the hourly trains further east, to York. Britain today has a number of passenger service companies using the various rail lines. We took the Trans-Pennine express service. Here is the first car of the three-car train, all diesel multiple units. 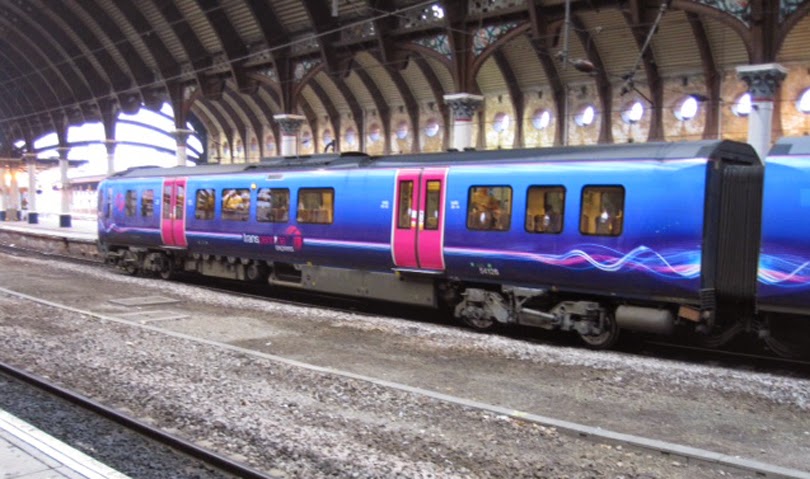 The equipment is shown in the York train shed.
The train was nicely on time to York, giving us all afternoon to visit the National Railway Museum there, which in my view is the finest railway museum in the world. (Probably I will have more to say about NRM in a future post.) After a fine dinner at an establishment with the unlikely name of The Slug and Lettuce, we spent the night in York, and in the morning boarded a train of another company, East Coast Trains, to ride the East Cost main line to London. The train made excellent time and had only one stop before reaching Kings Cross, London. Here’s the electric loco in its East Coast gray livery, with a maroon stripe, shown in Kings Cross. 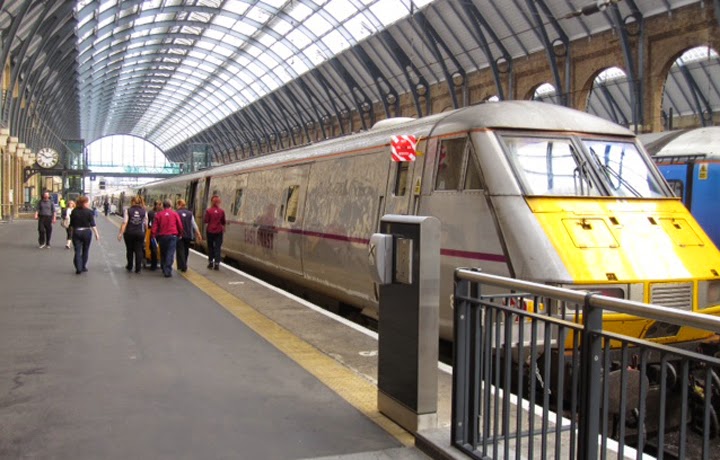 Kings Cross and the adjacent St. Pancras station have been greatly modernized and expanded, a pleasure to see for those who remember these stations as kind of dirty and run-down. We had a quick snack in the new part of St. Pancras, then boarded our Eurostar equipment for a trip through the Channel Tunnel and on to Paris. This is amazingly quick, and the Chunnel part is only 35 or 40 minutes out of a non-stop trip of over two hours. Here is Mary standing by several Eurostar trainsets at Gare du Nord in Paris. The nearest one is the one on which we had just arrived. 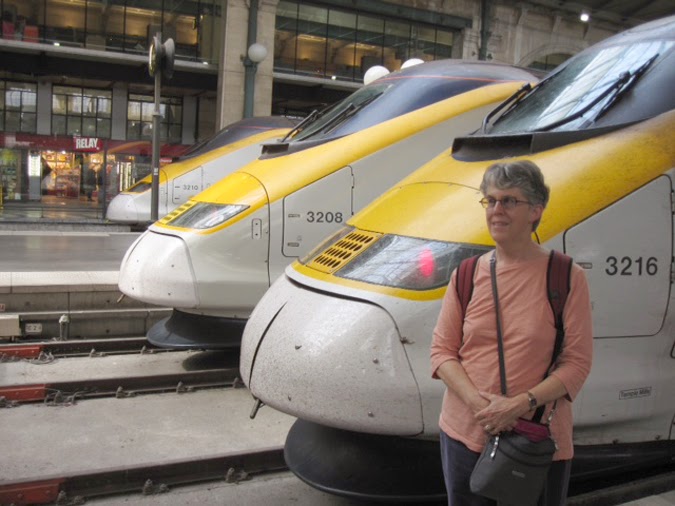 As I said to Mary, the bad part of this trip plan was that we were forced to eat dinner in Paris. One of my favorite cities anywhere, the food is only part of the attraction of Paris, and we had a great meal before returning to our hotel. The hotel had been carefully chosen to be half a block from our departure station in the morning, Gare du Lyon, from which our train would leave at 7 AM.
We had about a six-hour trip to Barcelona at TGV speeds, a marvelous way to see the French countryside, one of the loveliest landscapes anywhere. Mary had the foresight to reserve seats on the upper deck, so the view was excellent. The train doesn’t stop until far in the southwest of France, at Nimes and Narbonne, before crossing the border into Spain.
The TGV arrives at Barcelona’s Sant Station, a fairly clunky depot, but downtown we visited a depot of the old style, Estació de França, with a classic facade and train shed. Not only that, but the train shed is built on a curve (as is York). Here’s a shot from the concourse. 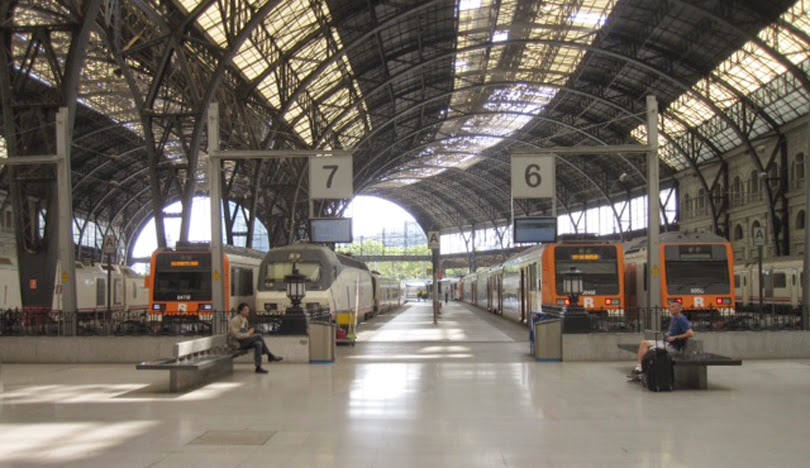 A fascinating feature of the depot is an HO scale model of the interior, showing rooms in the structure and also a variet of trains posed on the shed tracks. It is displayed in the concourse. 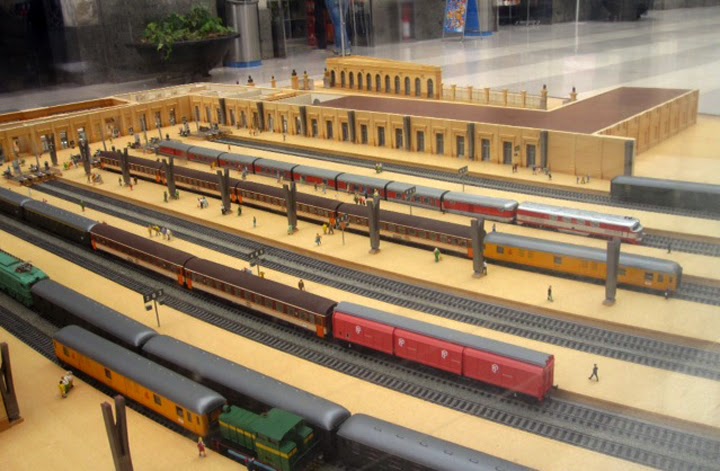 We had a great week in Barcelona, a marvelous city we had not been to before, but little of it had to do with trains. We learned a lot about Catalonia and how it’s different from most of Spain, had some very good meals, and (our actual purpose in making the trip) saw a lot of the art and architecture of the city. Many think of Picasso and Miro as French artists, or maybe as Spaniards, but Catalonians are very proud that in fact both were from this region of Spain, and there are superb museums for the art of both of them. And the Art Nouveau buildings in Barcelona, probably the most numerous in any city in Europe and climaxed by many structures by Antoni Gaudi, were a real highlight for us both. A terrific trip.
Tony Thompson
Posted by Tony Thompson at 5:49 PM