As I alluded to earlier, my wife and I were in Europe last month, and as described in a summary of our train journey across Europe (see the post at: http://modelingthesp.blogspot.com/2014/10/a-train-trip-across-europe.html ), we arranged to spend some time in York, England, so we could visit the National Railway Museum there.
This is without doubt one of the best railway museums in the world, and in my opinion it clearly is the best. Not only is their collection of locomotives and rolling stock very large, not only does it include numerous pieces of historic significance and great age, not only are many of these pieces fully restored, but in addition the museum has the space to display many pieces (though the display changes regularly so that the treasures rotate through the space.) It is a marvelous place to visit, even if you don’t know all that much about British railways. In my own case, having lived in England during a sabbatical year, reading many books about British railway history in the process (and of course visiting York then), I know enough to appreciate what I see there.
Many things besides locomotives and cars are on display. One example I enjoyed is this poster from British Railways days in the 1950s. It refers to “wagon labels,” what in North America are called route cards, used to inform switchmen (called “shunters”) of destinations of freight cars. Note that the shunter here, holding his shunting pole, is working in the rain and perhaps darkness. 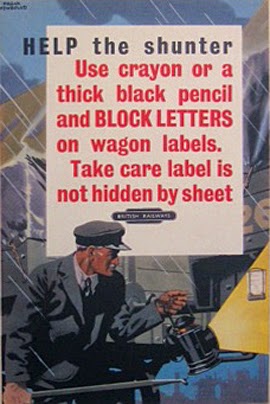 One good example of the kind of historical locomotive treasures in the collection is shown in this photo of “Gladstone,” first of the Class B1 engines built by William Stroudley of the London, Brighton & South Coast Railway between 1882 and 1891, with an 0-4-2 wheel arrangement. The paint scheme, with its bright colors and intricate lining and banding, is typical of many British railways in the 19th century and well into the 20th century. 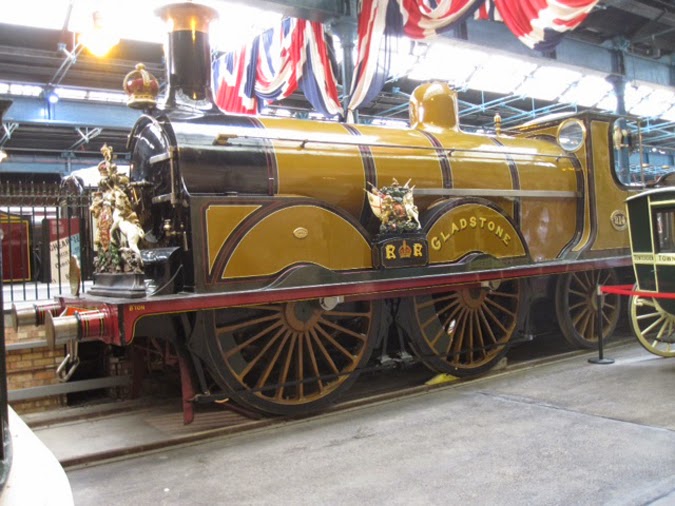 Another dramatic 19th century locomotive design is shown by this “single driver” example (meaning, of course, one driving axle), with 4-2-2 wheel arrangement, one of the 95 such engines, designed by Samuel W. Johnson and built for the Midland Railway during 1887–1900. Locomotive 673 (originally 115 class) is shown painted in the Midland’s crimson-lake livery. It is posed alongside a high-level platform. 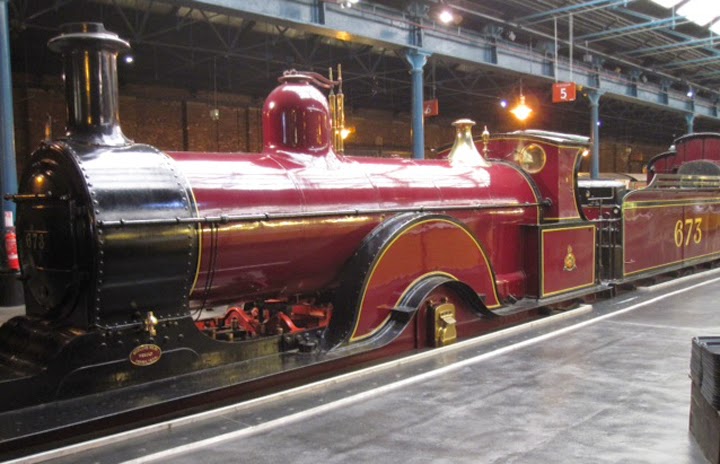 Perhaps the best known of the British railways prior to the nationalization into British Railways in 1948 was the Great Western Railway. Its dark green livery, nearly as dark as the Pennsylvania Railroad’s locomotive color, along with Belpaire boilers, makes its locomotives easy to recognize, and many classes of GWR engines were notable technical successes. Posed on the Great Hall turntable the day I was there was “City of Truro,” a famous 4-4-0 locomotive which achieved a speed record in 1904 of close to 100 miles per hour.

This is among the first of G.J. Churchward’s many remarkable designs for the GWR, making him among the most respected locomotive designers in British history.
But the real treasure for me in the collection is one of Sir Nigel Gresley’s streamlined A4 Pacifics, originally 35 locomotives built during 1935–1938 for the London & North Eastern Railway (LNER). Six of these outstanding engines survive in various museums today, and all six were reunited in Britain during 2013 and 2014. The most notable is surely NRM’s “Mallard,” still the world speed record holder for steam power, 126 mph in 1938. 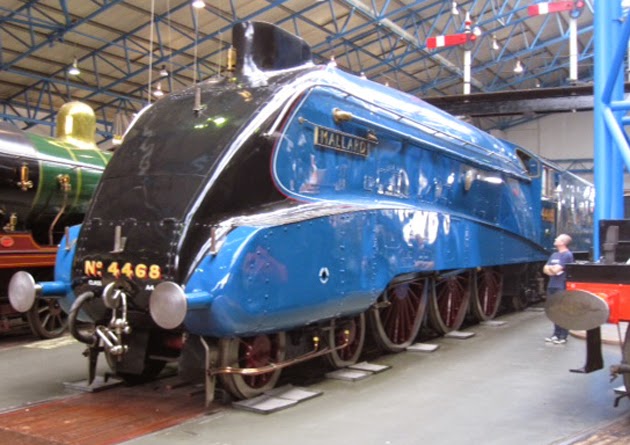 This view of the locomotive suffers somewhat from the fact that locomotives of any size are pretty hard to photograph in the exhibit space! This is the “Garter blue” paint scheme which is probably the most famous A4 paint scheme, standard for express passenger engines in the late 1930s on LNER.
Naturally I had to have my picture taken alongside “Mallard.” 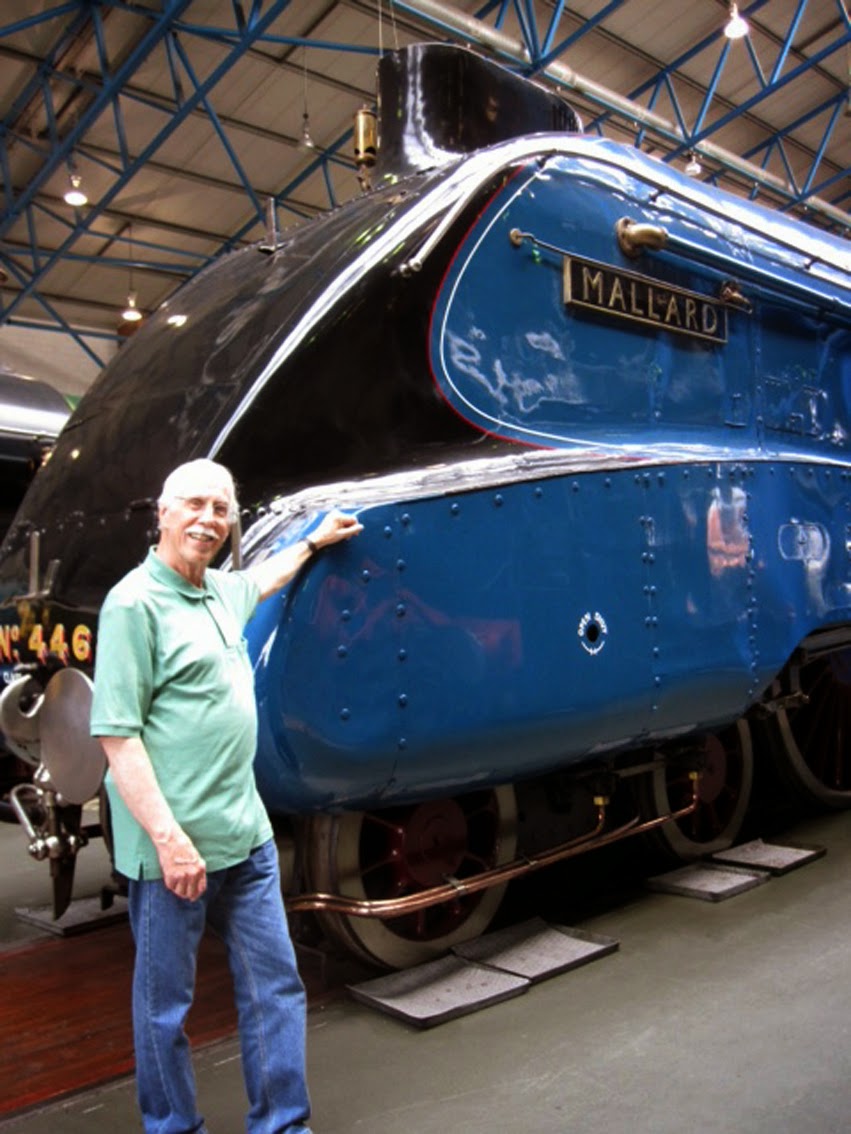 What a great experience to re-visit this brilliant museum. It was a genuine highlight of my entire trip to Europe.
Tony Thompson
Posted by Tony Thompson at 9:18 AM