This Part 6 is about car types beyond tank cars and simple house cars. Links to prior parts of this series are listed below. The first three parts described the basic method, and subsequent parts presented (and will present) specific car types or specific effects to be achieved.

I will begin with flat cars. An earlier post about this described my method briefly, and it can be viewed at this link: http://modelingthesp.blogspot.com/2011/05/weathering-flat-car-decks.html . I won’t repeat that material here, except to point out that the decks of flat cars, being out in the weather as well as accumulating dirt and debris from some cargoes, tend to get really dark in color over time. Here is an image of a 25-year-old SP car, a Craig Bossler photo at Reading, PA: 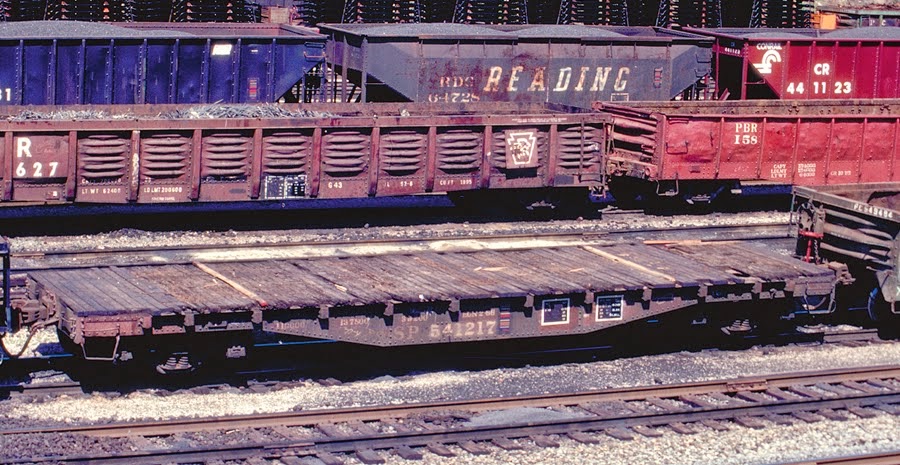 Note also that the deck is pretty beat up. Few modelers reproduce either the dark colors or the damage to the deck. The photo above admittedly shows a car later in its life, but it does depict the direction that deck appearances are headed. And by the way, the SP did not creosote decks of its flat cars, nor did it paint them, so the color shown did not arise from those reasons.
This means that raw “real wood decks” on model flat cars can only represent a just-installed deck, which would be a rare observation. To illustrate, on Otis McGee’s layout, which rosters about 75 SP flat cars for lumber loading, there is only one car with an unweathered deck. For these cars, I paint with acrylics, rather than use washes, although the same colors are used as shown in Part 1, link above. Shown below is a photo from my previous post on decks (link in previous paragraph) to show both “real wood” and plastic decks, as modified. 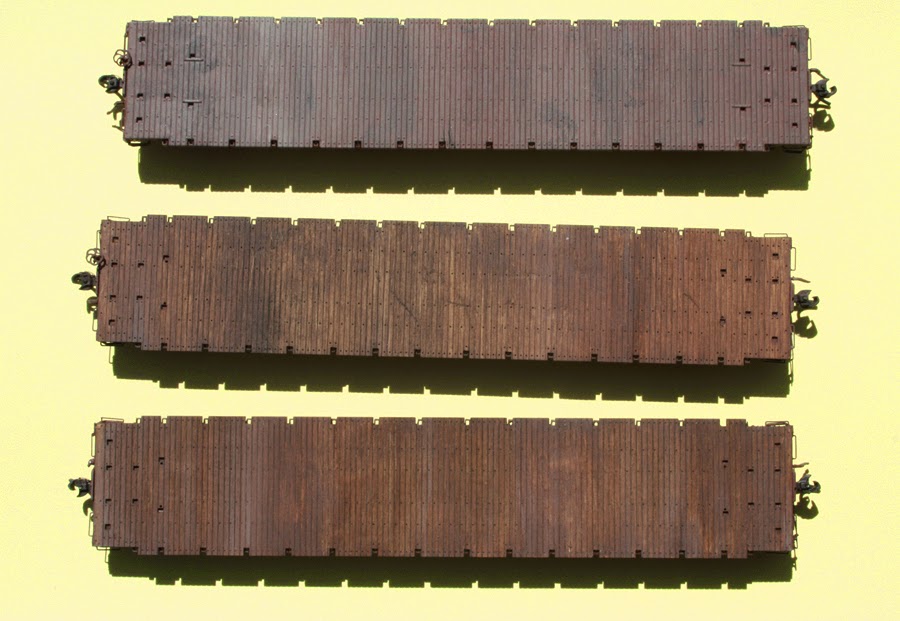 A related problem arises with bulkhead flat cars, for which there is both a steel body and bulkhead frame, and a wood deck and bulkhead facing. This is one of the bulkhead car models, produced by the Southern Pacific Historical & Technical Society, of the 1949 home-built SP modifications to Class F-70-7 flat cars. I weathered the body with washes, the deck and facings with paint. 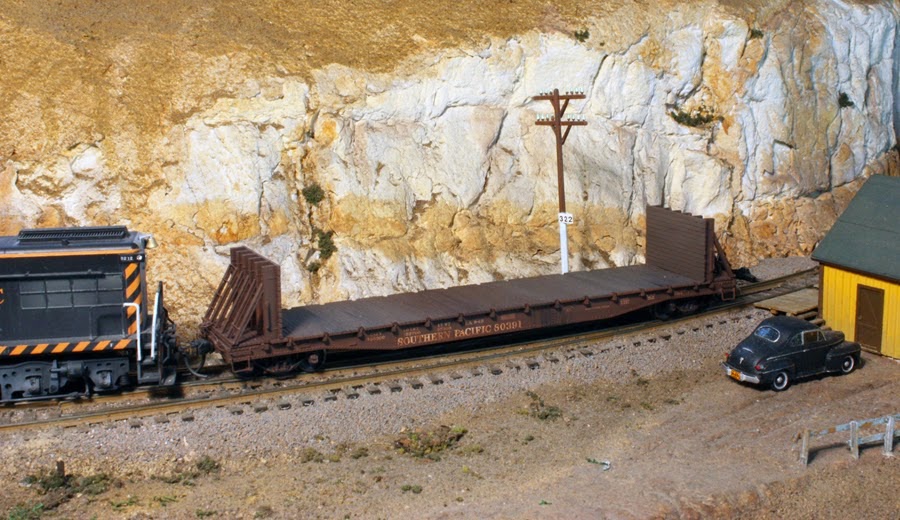 Another car type that presents its own problems is the covered hopper. In the early 1950s that I model, these cars were almost entirely used in cement service. It was not long before spilled cement from the loading process accumulated on roofs and trailed down car sides. That’s shown here with some dry-brush streaking with acrylic Titanium White, about the only time I ever would use white, and even here, I  mixed in a little Neutral Gray to tone it down. There is also some brownish dirt on the car, but it is not very heavy, as this car was built in 1951 and I am modeling 1953. The model is an InterMountain product, and like nearly all of SP’s 1950s covered hoppers, has “closed” sides. You can click to enlarge. 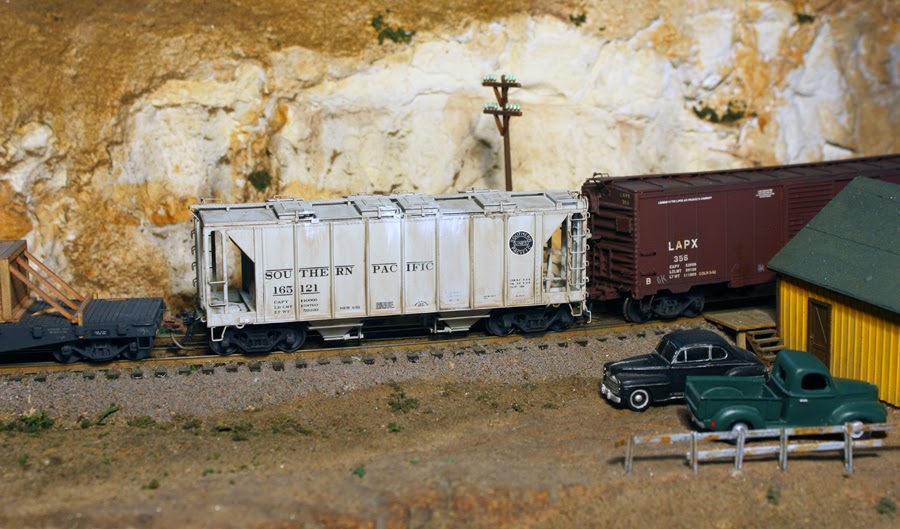 But despite the predominance of cement cars, there did exist covered hoppers in other service, including chemical and mineral service. Here is an example, a car leased to American Potash and Chemical, and assigned to haul the mineral trona; it’s an InterMountain model with open sides. Both these cars were weathered as house cars, that is, the roof was weathered in one session, then the sides and ends were done in a subsequent session. 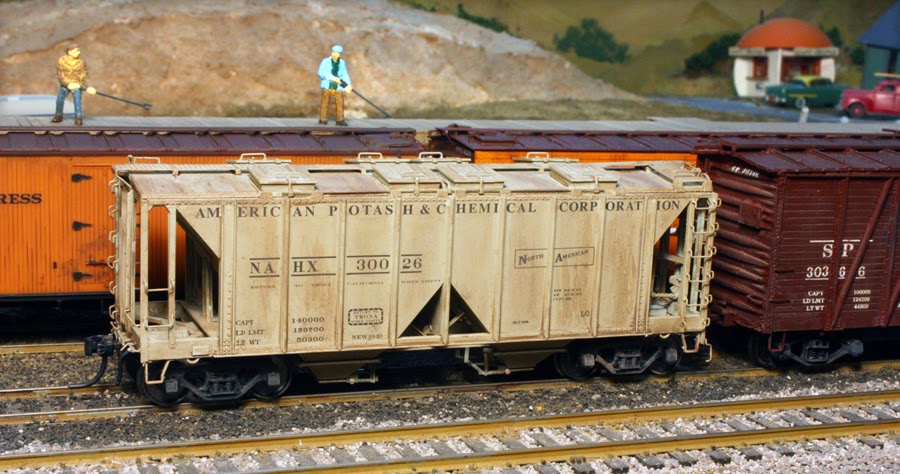 Other car types have challenges of their own, and deserve separate treatment. I will take up gondolas and hopper cars in a future post.
Tony Thompson
Posted by Tony Thompson at 10:49 AM