My column on timetable construction

In the October 2014 issue of Model Railroad Hobbyist (MRH), my column in the ongoing, multi-columnist series, “Getting Real,” is about making a timetable for model layout use. As with all issues of MRH, the magazine is free and can be downloaded from the MRH site, http://model-railroad-hobbyist.com/magazine/mrh-2014-10-oct .
Since I model the Guadalupe Subdivision of Southern Pacific’s Coast Division in 1953, my timetable was built with the idea of looking as much like the prototype ’53 Coast Division employee timetable as possible. I used the prototype front cover, part of the back-cover map, and the correct Guadalupe Sub timetable pages (inserting my mythical junction town of Shumala). Using information from the SP booklets, “Through, Manifest, Merchandise and Perishable Freight Schedules Between Principal Points” (shown in the column), I added condensed freight train schedule and car handling information in the front of my model timetable, and using the actual Coast Division “Special Instructions” document (also shown), I placed some condensed rules in the back of my timetable.
I should emphasize one point. The addition of rules in the back, and freight schedule information in the front, does not mimic an actual employee timetable, but does incorporate elements of prototype information from other sources, and gathers them into a single timetable for layout use. The “center spread” of the timetable does show the prototype scheduled trains and times at intermediate stations on the Subdivision.
I also added schematic town maps to the timetable. Like some of the foregoing ideas, I discussed this idea in a previous post (you can see it at: http://modelingthesp.blogspot.com/2013/10/setting-up-operating-session-creating.html ), but did not go into much detail. In the column, however, I did address the construction and use of such maps. I have used two Adobe applications to make these maps, Photoshop and Illustrator, and both can do a nice job. To show one of these, here is the map for East Shumala (what my blog posts about construction have called the “Shumala Extension”). I made this one with Photoshop. You can click on the map to enlarge it. 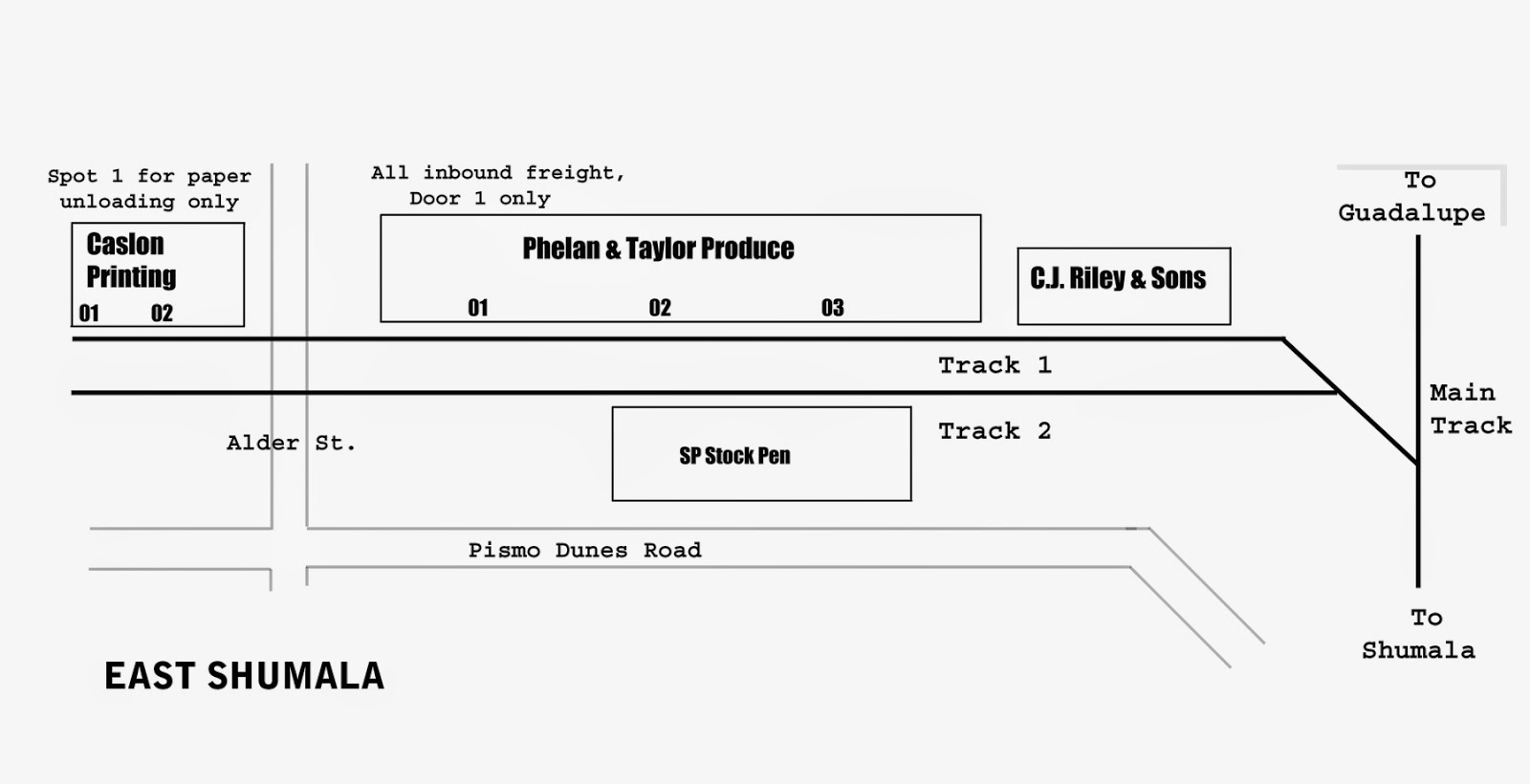 Note that there are numbers at two of the industries for specific car spots, that there is a specific requirement for car spotting at Caslon Printing, and that surface roads are shown also for orientation.
To give an idea of the completed document, here is the inside front cover and first (right-hand) page, shown being used at Shumala. 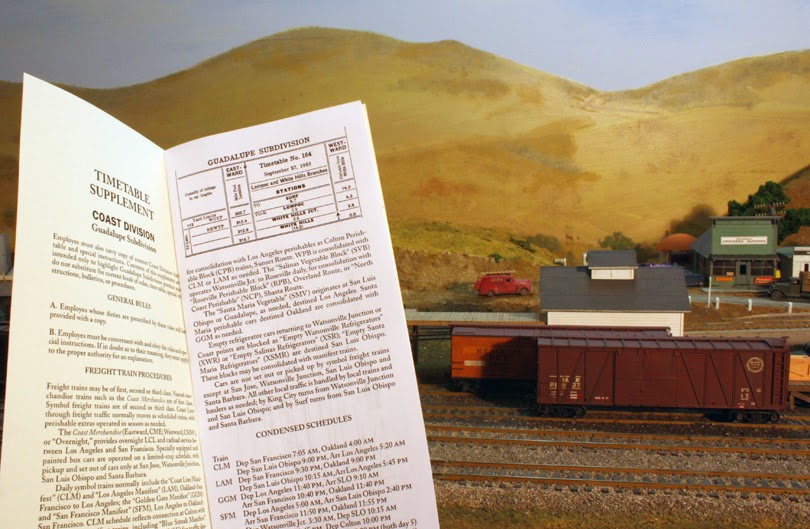 All this and more is described in the column. My maps for Ballard and Santa Rosalia (towns on my branch line) are in a state of flux, because final locations have not been chosen for some industries, and there is even a little track left to lay. That’s the beauty of making digital maps: they are a lot easier to modify and update than draftsman’s masterpieces with pen and ink.
Tony Thompson
Posted by Tony Thompson at 9:57 AM