In this eighth part of my series on acrylic weathering, I want to concentrate on the problems of light-colored cars with this method. The most common type with such paint is the refrigerator car, but the same considerations apply to any light-colored car, including tank cars. Links to the first five posts in the series, describing the basic method, can be found in my sixth post, at: http://modelingthesp.blogspot.com/2014/10/my-acrylic-weathering-method-part-6.html .
I should begin by repeating something I have said in previous posts, that reefers certainly did get pretty dirty in service, and it was quite noticeable on their light-colored sides. I discussed earlier several aspects of modeling Pacific Fruit Express (PFE) reefers in 1953, and in Part 2 of that thread, talked about grime accumulation and showed some photos. You can read that post at: http://modelingthesp.blogspot.com/2011/03/modeling-pfe-reefers-in-1953-2.html .Here is another prototype shot to illustrate the point, of how varied these cars could look in service. It is a John E. Shaw photo, taken at Green River, Wyoming on Sept. 3, 1955, used with permission. You can click on the image to enlarge it. 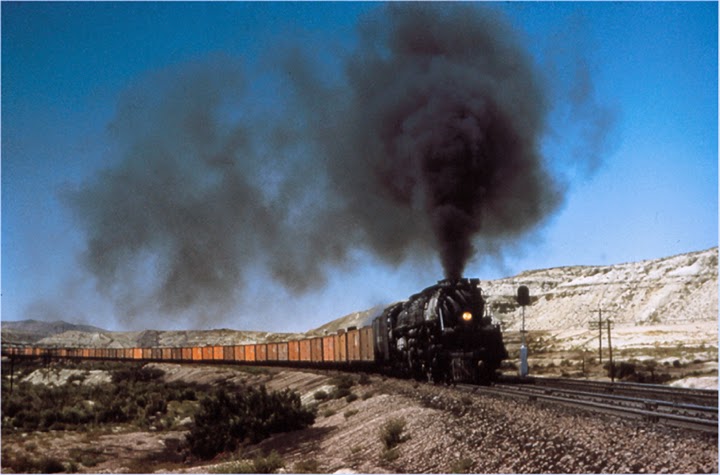 The variation from car to car of this all-PFE train is something few modelers, including me, have accomplished, though I keep trying.
Of course, not every car is severely dirty. Cars did get repainted, and some car owners, notably PFE, did wash cars whenever their grime was getting excessive, on average about every four to five years. For that reason, PFE car weathering cannot simply be scaled with the age of the paint scheme, because an older paint scheme may have been washed recently, and the car might then appear cleaner than a more recent paint scheme. Numerous statistics on PFE car washing can be found in the PFE book (Pacific Fruit Express, 2nd Edition, by Thompson, Church and Jones, Signature Press, 2000). The Fruit Growers car shown below is intended to depict a car which is moderately dirty.

But it is realistic as well as fun to try for seriously dirty cars too. Here are three of my recent PFE weathering efforts, ranging from very light on the car at right, to fairly dirty at left.

Some time back, Richard Hendrickson sent me a photo of several of his PFE cars, and as you can see, one of them is truly dirty, while the one at far right was new in Richard’s modeling year of 1947. But this dirtiest car is not beyond what is visible in color photos, so it might be a desirable end point for any weathering program.

I have continued to work on variations in weathering on light reefer paint schemes. As an illustrative example, here is a private owner car with a medium amount of weathering. This model of an AC&F-built reefer is from a Westerfield kit.

Finally, I should say something about salt staining on reefers. Heavy salt was often used with loads of meat and packing house products, but if used at all with produce, was far less, for example 5 percent vs. 30 percent. For that reason, I would advise modeling salt stains near ice hatches only on meat reefers, like this Swift car modeled by Richard Hendrickson.

As you will find if you experiment, getting a uniform acrylic weathering coat over a light color takes some care. Of course it can be done and with practice, I think anyone can do it, but it does require some extra attention.
Tony Thompson
Posted by Tony Thompson at 10:15 AM