Among my oldest models, dating from back in my teens, is an Athearn metal box car, built from a kit. Its lettering represented the car as SP 60730, and correctly bore the corresponding SP class number, B-50-25. But the Athearn metal boxcar model has an original or sharp-cornered Dreadnaught end, and conventional 10-panel sides (five side-sheet panels on each side of the door), along with a conventional, riveted pre-war Youngstown door. None of these features is correct for SP Class B-50-25, which had 12-panel sides, Improved Dreadnaught ends, and a postwar welded door. (Athearn, incidentally, applied this exact Class B-50-25 paint and lettering scheme, right down to the car number, to their plastic box car model also, for which it is equally wrong.)
I have written in a previous post about upgrading some aspects of the old Athearn metal box car models. (You can read that prior post at this link: http://modelingthesp.blogspot.com/2011/09/upgrading-old-models-4.html .) The work I described there was about the underframe and running board, so I won’t repeat that, except to say that the present model also had a running board problem, not only in that the rather thick Athearn white metal casting was broken, but that it poorly represented a steel grid running board. I replaced it with scale 1 x 6-inch stripwood and cast metal lateral running boards.
To go about renumbering the car, I had to contemplate the fairly heavy, “dusty” weathering I had applied. The obvious solution was to “patch” the paint, just as the prototype does when reweighing requires new capacity data to be applied. I simply brush-painted rectangles to cover up the old car number (along with the capacity data), and to cover the wrong class number, while also providing fresh paint on which to apply reweigh and repack stencils.
Here is the car at this point. The roof and ends need to receive additional weathering to conform to the look of the car sides.

The stamped metal ladders and metal sill steps look good even by today’s standards, and the door, though not well detailed, is satisfactorily thin and has the right features in general.
Having used glossy paint on my “patches,” I could go directly to decals. I chose to renumber the car as Class B-50-19 (SP 37840–38839), a class for which I only had one model, and that one not a great model; in fact, this car may supersede that older model. I used the excellent Speedwitch decal set, No. D114, which is designed for SP and T&NO 1937 AAR box cars (of which there were thousands). You can do several cars with this decal set; I didn’t even use all the data for one car, since I didn’t alter the dimensional data at the right of the car side. (You can click to enlarge.)

The end supports for the running board are not yet applied. You can see that a brake service stencil has been applied to the reservoir; decals are supplied in the Speedwitch set. I have discussed brake service stencils elsewhere, available at: http://modelingthesp.blogspot.com/2014/04/brake-service-rules-part-2.html .
I wanted these paint patches to look slightly less than new, so while weathering the car roof, I used a very light acrylic wash to genttly dirty the new lettering. Here the objective was only to make the new side and end lettering less “clean white” (except for the reweigh, repack, and brake service stencils). Here is a side view to show what I mean, which can be compared to the as-decaled shot above. The car is spotted in front of a reefer being iced at Shumala on my layout. 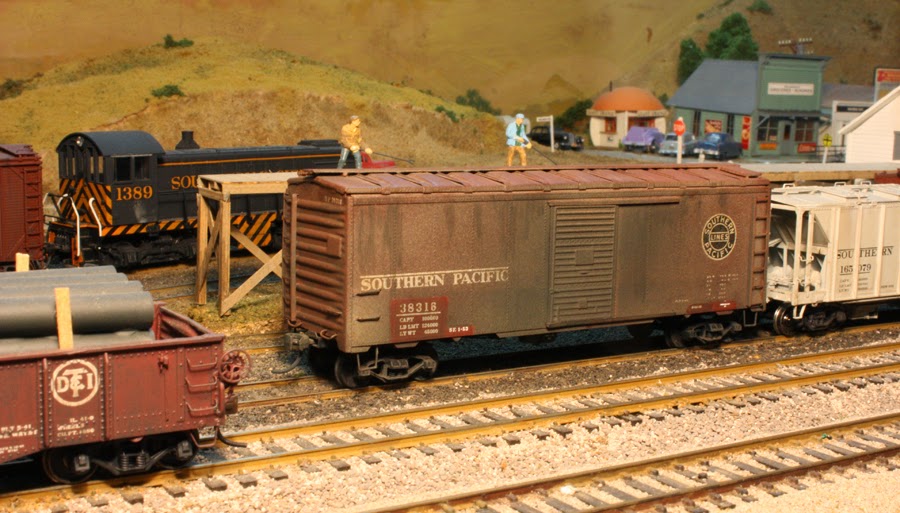 This small project was only a way to have this model correctly numbered for the car body that it is. Modeling features otherwise are little changed except for a couple of minor upgrades. The point is to show that this kind of “paint patch” may be the solution to lettering or numbering problems you might encounter with models.
Tony Thompson
Posted by Tony Thompson at 9:55 AM