I have just returned from this year’s Naperville (Lisle) meeting. The annual Railroad Prototype Modelers meeting, long located in Naperville, Illinois in October of each year, has in recent years been held in a hotel in neighboring Lisle, Illinois, a few hundred yards outside the Naperville line. Accordingly many still call it “the Naperville meeting.” This year’s edition, which took place on October 9–11, was the 21st, the first 16 or so having been hosted by Martin Lofton, proprietor of Sunshine Models.
As always, the clinic schedule was full and generally very good. We also had another iteration of the “Friends of the Freight Car Dinner,” with this year’s speaker being Ben Hom. Ben spoke about where freight car modeling has been and where it is going, in the framework of the New England, Berkshire & Western model railroad club at Rensselaer Polytechnic Institute, of which Ben is an alumnus. It was a good talk and well received. In the photo below, Ben is at the podium in the front of the room, just about to begin his presentation.

At the meeting banquet the following evening, I presented a Tribute to Richard Hendrickson, as I was invited to do by convention chair Joe D’elia. I added material to what is contained in my earlier blog post about Richard (see: http://modelingthesp.blogspot.com/2014/07/in-memoriam-richard-hendrickson.html ). I may put that added material into an additional blog post about Richard.
Also, as is entirely usual and traditional, there was an excellent model display. I did not attempt to photograph more than a few impressive examples. Here is one of the models by Ed Rethwisch, clearly labeled as to origin; I liked the moderate paint failure depicted on the roof. 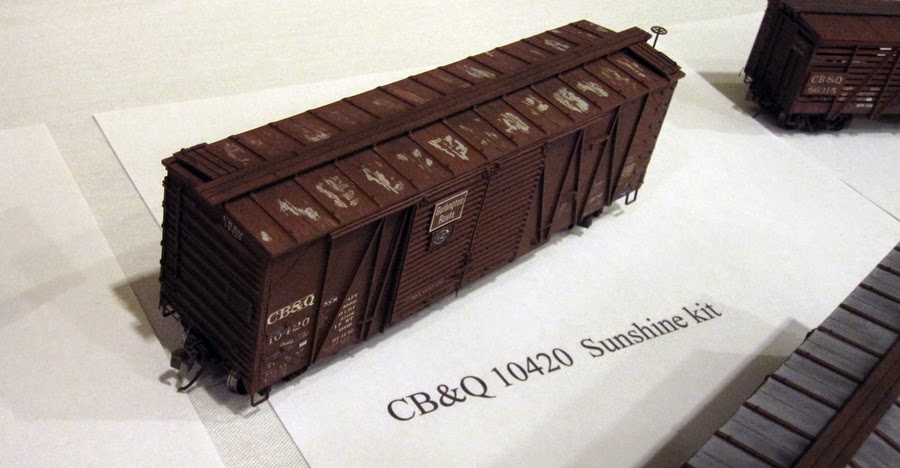 Another set of excellent models was contributed by Aaron Gjermundson. He also showed a good description of each model in a list alongside his display, and a few prototype photos in the foreground.

One of the long-time stalwarts among the various dealers and vendors who come to this show is Bob Liljestrand, doing business as Bob’s Photo. Here is part of the photo resources available for inspection, binders filled with 8 x 10-inch prints, a truly impressive amount of material. 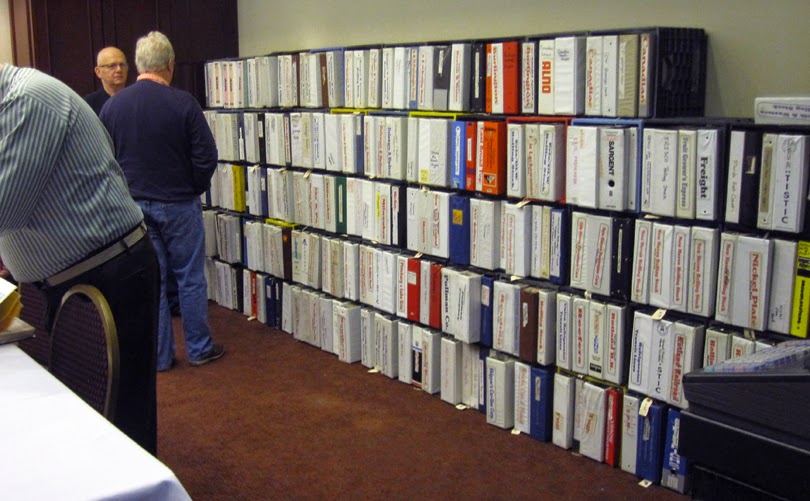 Finally, I will mention that I always enjoy it when I am lucky enough to have an invitation to operate on one of the many fine layouts in the area. This year I was able to join the operating crews at both Bill Darnaby’s and Bob Hanmer’s layouts. At Hanmer’s I switched the paper mill. Behind me, at one point, were Great Northern ore trains on both the upper and lower levels (the yard at bottom is Gunn Yard). 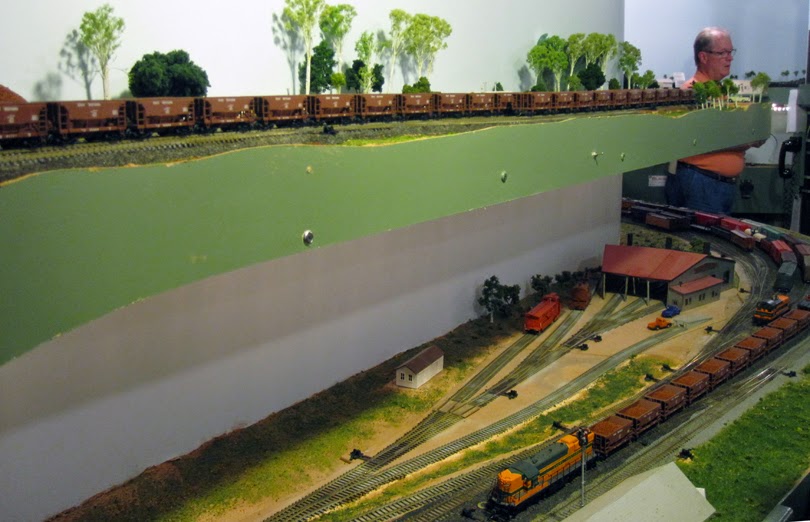 All in all, another fine Naperville (or Lisle) meeting, structurally well done and well attended, but particularly good for meeting old friends and sitting down to talk, maybe even to have a beer or two.
Tony Thompson
Posted by Tony Thompson at 10:38 AM