My first five posts in this series described the basic method using acrylic paint in the form of washes. Part 6 discussed weathering of flat cars and covered hoppers, and contained links to all five of the introductory posts; it can be found here: http://modelingthesp.blogspot.com/2014/10/my-acrylic-weathering-method-part-6.html . Part 7 addressed gondolas and hoppers, and Part 8 took up the special challenges of lighter-colored cars such as refrigerators. Links to both are below.

Some readers of these posts will have seen the November issue of Model Railroader magazine, with several articles on weathering. The one by M.R. Snell on freight cars, curiously, only addresses covered hoppers, presenting three methods. One of these uses acrylic paint, not washes as I use, and really describes painting the car sides. This is a far different technique than I have been illustrating in this series.
In the present post, I discuss some of the details of the weathering process. These are all little things, but things that really can make a difference in how a model looks. All are based on prototype photos, and are part of the effort to reproduce what is seen there.
One thing to do prior to overall wash weathering is to emphasize boards in wood parts of cars. Cars with wood sheathing, wood running boards, or wood roofs, typically weathered a little unevenly, as the individual boards held paint a little differently. One way to bring this out is the use of artist’s color pencils. There are several brands of these, and both my and Richard Hendrickson’s experience is the the Prismacolor brand works well. Some other brands do not.
In our joint clinic on weathering, Richard and I showed examples of the use of pencils. Following are some photos from that clinic. A brief summary of our clinic, in the form of a handout, is available at the following link: http://modelingthesp.blogspot.com/2011/10/weathering-clinic-handout.html .
Here is a photo showing the process of varying the color of a painted running board. Such variations definitely do show up in prototype roof photos. You can click to enlarge.

The same applies to wood sheathing, especially on light-colored cars like refrigerator cars. Again, remember that the overall weathering comes later, and these perhaps exaggerated streaks will then be less evident. 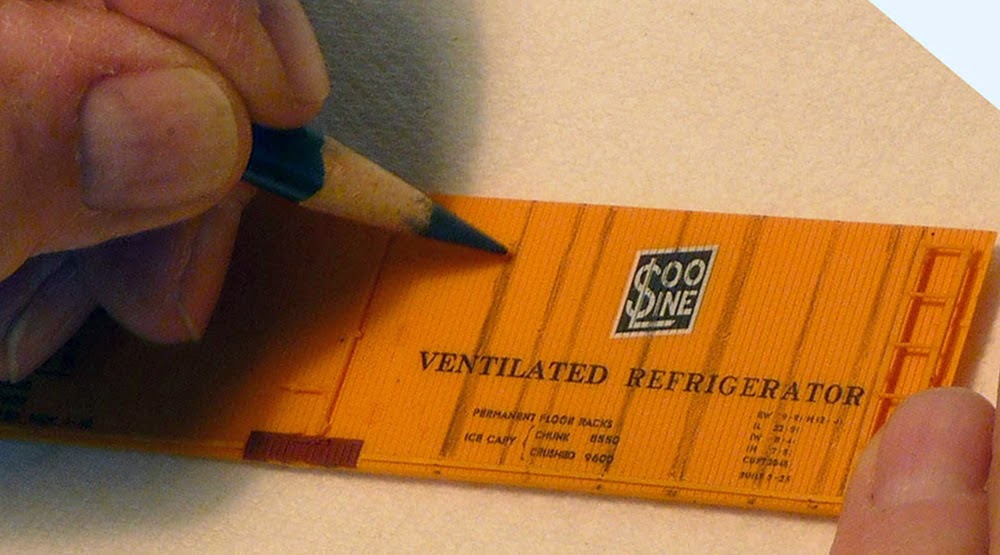 Another place the Prismacolor pencils can be effective is on stock cars, and here again, individual boards can weather differently from each other. Vary the color of some boards with the pencils prior to overall weathering. Another point: stock cars were cleaned between all runs, often steam cleaned, and many prototype photos show their paint as faded. (They most certainly did not show staining from manure, old straw bedding, or other carry-overs from the previous trip, as any shipper would have rejected such a car as insufficiently clean for movement of his stock.) Here is a model example of the kind of fading I mean. The car is a Red Caboose product. 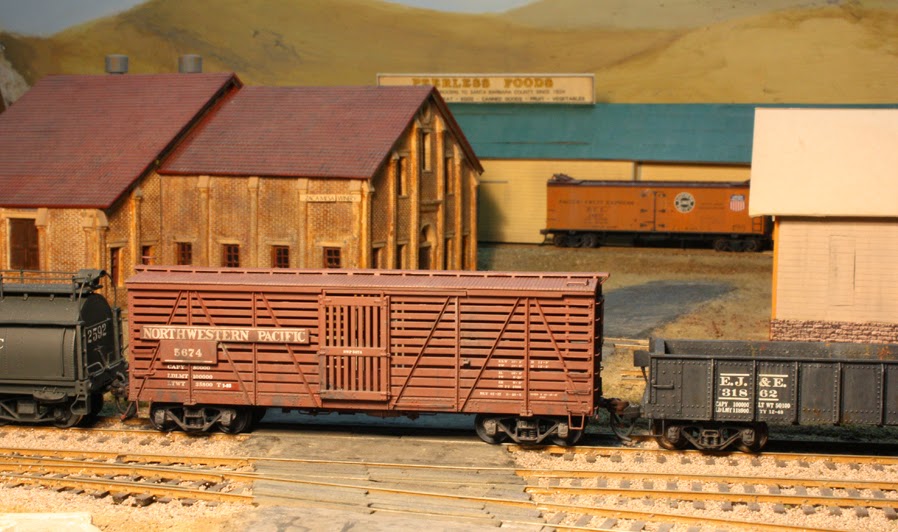 Another example of how effectively stock cars can be faded and weathered is shown in this photo of a Santa Fe class SK-T car, modeled by Santa Fe modeler Michael Gross (photographed by him and the photo used by Richard and me with his permission). Board to board color variations are visible here. I also like his subtle paint failure on the roof. This effect is easy to caricature, but here Michael has done it very effectively.

The use of pencils, as shown in these few examples, is just one of the ways to make weathering more detailed and more effective, particularly if it is kept subtle. Ideally the viewer likes the “look” of the model without being hammered over the head with specific effects, and that is the result we are striving for. I will continue with additional details in a forthcoming post to continue Part 9.
Tony Thompson
Posted by Tony Thompson at 10:01 PM