I know that the subject line for this post could mean many things. But I’m referring to my own layout, and to an evaluation I was asked to make, as a member of a discussion panel about layouts, on “Lessons Learned.” This took place as part of the recent NMRA National Convention, nominally hosted in Santa Clara, California, but in fact entirely virtual. The discussion panel was one of many virtual events that was held.

The layout owners on this panel were asked to identify the features of their layouts that were “good,” meaning turned out as planned or were good features that just developed. Also requested, of course, was identification of mistakes or well-intentioned features that simply did not work out. This seemingly simple charge soon proved, to me at least, to be rather more thought-provoking than it seemed at first glance.

I should begin with the layout itself. As experienced readers of this blog will know, my layout is T-shaped, with the two legs of the “T” each about 15 feet long. It is essentially located as a peninsula in the room (the vertical leg of the T), with a cross-piece along the far wall of the room. Here is an overview of most of the layout, looking up the peninsula: 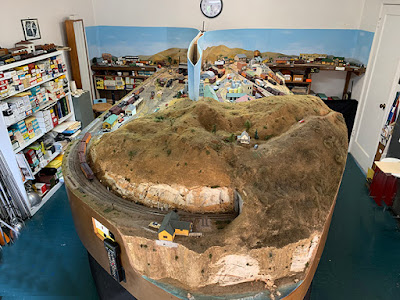 Several things are evident in this photo, that I deliberately chose as features, and that I think are among the successful aspects of the layout. First, aisles on each side are wide, 3 feet at left and almost 4 feet at right. I have operated (and still operate) on layouts with much narrower aisles, and believe me, I like this much better. Second, the large hill at the end nearest the camera acts as a view block to keep the two sides of the “T” visually independent (the photo is taken standing on a stool — this is not a view a visitor would get unless 7 feet tall).

Third, my previous layout had 2 percent grades, uncompensated, to and from staging located on a lower level. I resolved to keep the entire main line, including staging, perfectly level in the present layout. I did accomplish that, and have been glad ever since that I did.

It’s a minor fourth point, but it turned out that the end wall in the photo above is an excellent location for the layout clock, visible from every operating position. This isn’t a fast clock, it runs at 1:1, but it permits “layout time” to be the part of the prototype Guadalupe Subdivision timetable in which I want to operate. (I have posted several discussions about fast clocks and my use of the clock seen above; for an introduction, you might like to read this one: https://modelingthesp.blogspot.com/2017/12/fast-clocks.html ). And I will mention in passing a kind of fifth point, that adoption of DCC considerably simplified some aspects of layout wiring, but that wasn’t a design choice.

My sixth and last point about things going as well or better than I planned is the amount(s) of switching in the three towns on the layout. I do proportion the work in each town when I set up an operating session, but generally operators have found the amount of work to be about right. Below is a snapshot of SP 2829 backing across Nipomo Street at Ballard, in the midst of switching. In the background can be seen six of the industries here. 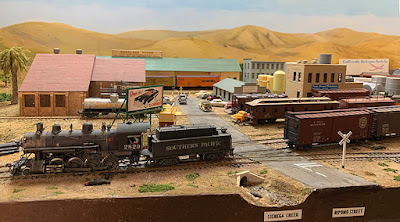 What about things that haven’t been so satisfactory, either design errors or defects that have evolved over time? Well, there are some of both. One of these was a choice of convenience, to re-use the backdrop created for the layout when it was set on the Pacific Coast east of Surf, with high hills right behind the SP tracks at what was then called Jalama (Shumala on the present layout). But Shumala is set a little south of Oceano, and though there are hills in the distance there, they aren’t like my backdrop. Well, most people don’t know that, and I guess I will continue to live with it.

I did learn something from that backdrop issue, and have made the backdrop on the new part of the layout, at the end of the branch at Santa Rosalia, on the Pacific Ocean shore, accurately displaying the view you would get looking southward along that shore. In this view, you can also see the bill boxes on the shelf under Santa Rosalia, for both the towns of Ballard and Santa Rosalia. There is still one industry to be built here, but most everything else is completed.

Another point which has occasioned a lot of comment from visitors is my staging arrangement, basically a transfer table. I got this idea from John Signor, who has a 16-foot one on his layout, and his operates flawlessly. But unfortunately I ignored John’s advice on building it. He had a local cabinetmaker build his, and it is beautifully solid and square. Mine is only 7 feet long, so I thought, “Heck, I can build that with plywood and 1 x 4s.” I was right that I could, but wrong that it would perform anything like John’s professional version.

I was a little surprised how interesting it turned out to be, to step back and assess the layout from a wider perspective. On balance, my feeling is that the layout has turned out well, very much the kind of thing I wanted to accomplish when I started on this version, now about 12 years ago. None of the things I regret, or have realized should have been better, have been serious drawbacks, and I suppose you can hardly wish for more than that.